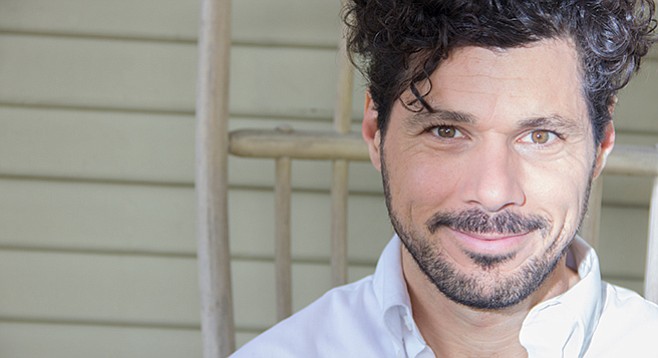 These are the last days to catch Bushwalla performing as Bushwalla. According to his own crowd source funding campaign, the singer/songwriter plans to retire the stage name and alter ego he has performed as for the past 15 years. At some point in the new year, Bushwalla will revert to his given name, Billy Galewood. It’s not entirely clear why. Bushwalla’s been a good ride for Galewood, who left his native Cleveland, Ohio, as a teenager for the greener entertainment pastures of New York. There, he breathed fire and juggled on street corners for a time in order to make ends meet. Which he still does, on occasion, in his stage act, while playing music. He describes himself as an acoustic hip-hop artist rooted in folk, comedy, and optimism: “Though I fall through glass,” he raps, “I’m higher than ever/ And I’m reaching the sky.”

Bushwalla is a part of the Java Joe’s family, one of many global acts to have developed at the legendary coffee shop/performance house. They include local luminaries such as Jewel, Steve Poltz, Jason Mraz, and Gregory Page. Bushwalla co-authored Mraz’ debut album and makes side coin himself by licensing many of his own compositions to film and television. Musically, he falls somewhere between Poltz and Mraz — Galewood’s a funny guy, but he can also wreck your emotional status with some vulnerable-as-hell R&B vocals. Followed by free-verse hip-hop and some reggae with a bowling pin balanced on his nose.

By the end of a day, it seems like a lot of work to be Bushwalla. You might wonder if under the hood lurks someone who really just wants to be liked, but why waste time psychoanalyzing? Leave that to the experts. “Everybody’s rain falls down,” he sing/raps. “Then you gotta get up.” Bushwalla and friends will perform every Saturday at Java Joe’s through November.