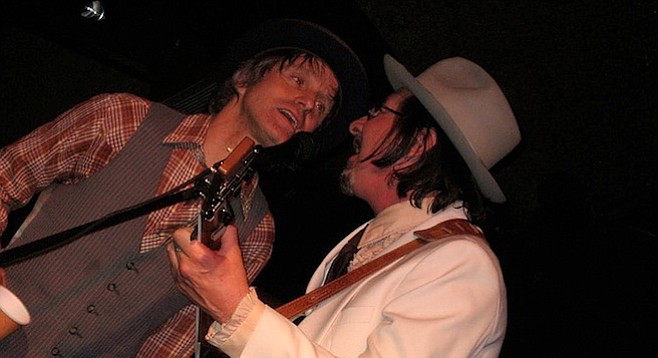 “Yes, we decided we wanted to play a show because [bassist] John Castro was gonna be in town from NYC,” Rugburns ringleader Steve Poltz revealed to the Reader about the band’s surprise reunion next Tuesday, June 23 in North Park. “It started as a lark with only 12 days notice. So I called Tim Mays and he said he could do it at Bar Pink.”

At this writing, that performance still doesn’t appear on the Bar Pink website (which posts its recurring Tiki Tuesday as happening that night). However, Poltz spilled the beans with a short post on his website, and as a result, “The show sold out that day.”

“So, we decided why not play a show for Java Joe, and just have more fun. But then that sold [out], so we added another at Joe's and that sold out.” Those reunion sets will take place at Java Joe’s in Normal Heights on June 24 (for a bill with local crooner Jose Sinatra, said to be on his “Farewell Tour”) and June 25 (with Jeff Berkley).

The Rugburns, individually and collectively, have a long history with Java Joe’s, including another surprise reunion set they staged on January 11, 2013 for the venue’s final event at its previous locale. “We never even planned to do a gig at all. This all started from a silly conversation I had with Castro when I was in NYC last week.”

With the Bar Pink show and the first Java Joe’s date already sold out (and only around a dozen seats left for the third show at this writing), Poltz warns Reader readers not to expect more surprise sets. 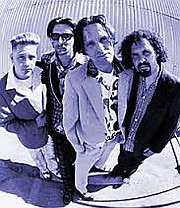 “That's all we can do, because John [Castro] has to get back to NYC and [drummer] Stinky back to Sacramento,” says Poltz. “I'm on tour in Canada right now and fly in the day before the show. Doc lives in Oceanside, so that'll be an easy jaunt for him. I'm looking forward to the fun.” Castro is currently a member of Morricone Youth.

“We haven't played three shows in a row in a very long time so we should be extra stupid by the third one.”

Enjoy the attached unreleased video obtained exclusively for the Reader, produced to promote the Rugburns’ Taking the World By Donkey album and narrated by Frank Zappa’s one-time collaborator Wild Man Fischer, who at the time was living at low budget hotels in downtown San Diego and singing the Rugburns’ praises to anyone who’d listen.