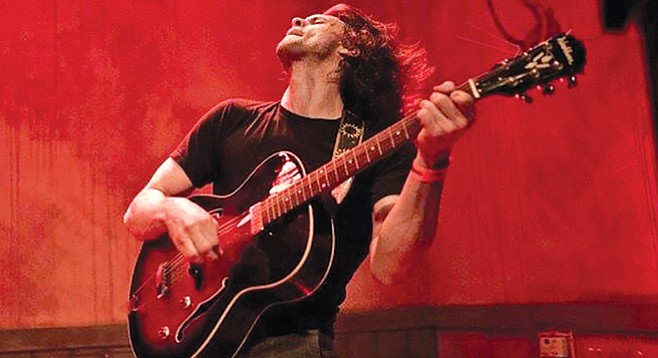 Then came the label. Lucky Lucifer front man Joe Luciano, 29, launched Legend Records in 2012 so that unsigned local bands like his and Chocolate Revolution and the Roman Watchdogs could make a record.

“I was spending a lot of money at other places for recording and rehearsal space and not getting a big return,” the lead singer tells the Reader.

So Luciano took over a 2500-square-foot storefront on Garnet Avenue that used to house a florist called Pots by Pat. It’s now home to Legend Records, a rehearsal/recording space that started hosting live shows on Halloween, 2013.

Now Luciano uses six independent promoters who bring in their own “private event” shows to a 175-person capacity venue space which often carry a $10 cover. “Usually the promoters get 40 percent of the door,” Luciano explains. “Or if I promote the show the 40 percent is divided between the bands.”

One of those promoters is Sam Kumar who plays in local math-rockers the Indys.

“I just heard from an agent for [Chicago metal band] No Zodiac who asked specifically if we were going to be around in two months,” Kumar tells the Reader. “He heard everything in San Diego is closing down.”

Luciano says all styles of music are welcome.

While all shows are promoted to the general public, Luciano says the private event status helps ensure each outside promoter brings good behavior to his own event. “It helps keep riff raff out.”

A hole in the wall was created at a show promoted by Mike Correa who is the lead singer of local punkers Impale Thy Neighbor. He says that mishap was amicably resolved when he forfeited his promoter cut to cover the damage. “I basically lost my $300.”

Luciano says Impale Thy Neighbor are welcome back.

Unlike Soma or Epicentre, which relies on bands buying blocks of presale tickets, Luciano says Legend Records will always rely on a cut-of-the-door arrangement for band pay.

Outside promoter Kumar says it’s all about keeping it simple. “Other places make it so formal.” Kumar contends that each Epicentre show has a built-in cost of more than $1000 to cover the staff. “They get their $1000 before the bands get anything. It’s just music. That’s all it needs to be.”