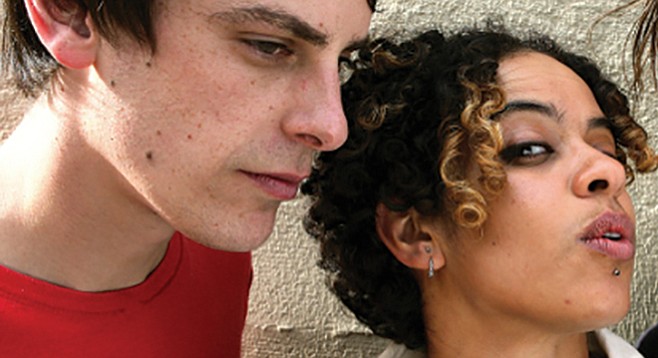 Two-thirds of the Thermals have a secret past

Casual fans of the Thermals may be surprised to learn that the duo at the core of the punk-leaning trio, Hutch Harris and Kathy Foster, recorded an acoustic folk album about a year before the first Thermals disc came out. The record, Hutch and Kathy, recently enjoyed its first-ever vinyl pressing.

The Reader caught up with Hutch Harris via e-mail regarding the reissue, and how he and Foster started making music in the first place. Funny enough, the two met at one of the most un-punk locales one could imagine.

From the LP Hutch and Kathy

“Kathy and I met way back in 1993 or so, probably right after we both graduated from high school, so we were like 18,” Harris explained. “I actually met Kathy in the parking lot of a Grateful Dead show. Kathy’s friend was selling ganja goo balls.”

The duo hit it off and ended up playing in a couple of bands before Hutch and Kathy was recorded. The final band, Urban Legends, was, according to Harris, “a rock band that also did folkier stuff, which was the direction we decided to go with the Hutch and Kathy LP. I wanted to make a record that was quieter, but still catchy with good energy.

“After we were finished, I wanted to record a project that was louder and faster and quicker,” Harris said. “Therefore, the four-track and the Thermals.”

The tour in support of the Hutch and Kathy reissue will consist of the duo tackling songs from their entire catalog. Harris also said to expect songs from another one of his side-projects, Forbidden Friends, as well as a handful of covers. He was especially excited about a version of Green Day’s “Words I Might Have Ate” (off 1992’s Kerplunk) that they have been working on. Their stop at the Soda Bar on Sunday, May 17, certainly won’t be their first trek through town.

“We love San Diego,” Harris explained. “Thermals have probably played San Diego like 12 times, it’s always a blast. Although we’ve lived in Portland for 17 years, we’re from California originally [San Jose] and I think deep down we still consider it our home.”

Perhaps the most notable aspect about the Hutch and Kathy LP is its odd placement in the musical oeuvre of Harris and Foster.

“Going from an acoustic folk band to a loud rock band is definitely a different trajectory than most, but we’re proud of that. We may do another Hutch and Kathy record one day. Kathy and I will most likely be making music together for the rest of our lives,” Harris said.