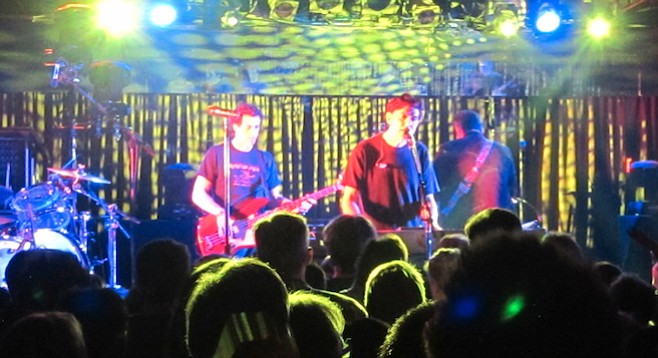 Solana Beach got a treat with two full sets and a double-dose of encores from popular alt-rockers They Might Be Giants. The band had no problem filling the extended time by taking a heaping helping out of their Giant bag of tricks.

John Flansburgh was in humorous overdrive throughout the show. Over the past couple of years, the Giants have worked “comedy bits” into their shows, and this night was no exception. The standout was a surprise phone call from They Might Be Giants’ “mother” in the middle of the song “Older.” Momma Giants, who sounded mysteriously like a high-pitched Flansburgh, complained to John Linnell about the agonizing birth of They Might Be Giants — how the delivery of all five men simultaneously was painful for her to even think about. She also highlighted how their drummer, Marty Beller, was the only one “good enough for his own name,” since the remaining four members are either a Dan or a John. She finished up with a rant about issues she was having with her Yahoo password. It all sounded hilariously familiar.

The primary set stemmed from their new album, Glean, and “Erase,” “Answer,” and “Unpronounceable” all worked well in concert. The extended format allowed plenty of room for deep tracks and older live hits, so the crowd was pumped when the band ripped out “Number 3,” “James K. Polk,” “I Palindrome I,” “Doctor Worm,” and “Dig My Grave.” Perhaps most surprising was a cover of Destiny’s Child’s “Bills, Bills, Bills,” which will be popping up on the Onion’s “A.V. Club Undercover” series in the next couple of months.

Similar to their recent shows at the Belly Up, They Might Be Giants provided free beer to the crowd, making the inclusion of “Damn Good Times” more fitting.