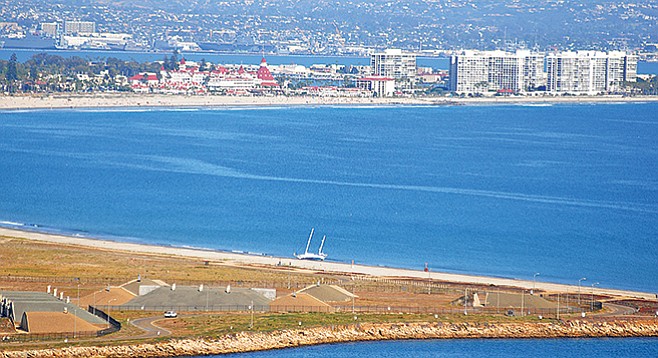 We’re writing you today about a small [25- to 30-foot] ketch sailboat which is currently beached on its starboard side right on the beach facing south at the North Island Naval Air Station. The ketch has been there for over two weeks now and its continued presence remains a mystery to us all.

The private boat’s location is near Moffett Road just south of the intersection of Rogers and Moffett near Halsey Field’s runway 11. We have been observing the ketch daily here using the Sun Diego Live Webcam Cabrillo Monument camera on our computer at website sundiegolive.com. [The] sailboat appears right above the day’s date in lower right-hand corner.

We have made calls to the authorities at North Island NAS, namely the office of the officer of the day and the main security office there. The O.O.D. office refused to comment, and the security people cited and retrieved an incident report but said that they could not give any sort of comment on the small craft either. We asked if we could possibly help at all with a salvage effort or if anyone had any information on the owner of the ketch and they took our number for a call-back. It’s been about three weeks now and we’ve heard nothing and the boat’s still there.