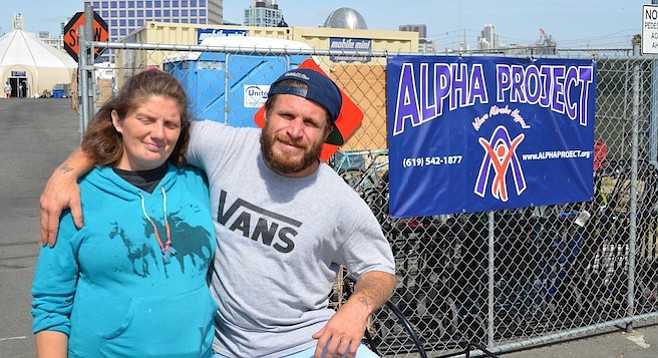 On Tuesday, March 24, the San Diego City Council will vote on whether to approve a proposal by St. Vincent de Paul Village for year-round "interim housing" for the city’s homeless.

But on Sunday morning, March 22, residents of the temporary winter tents in Barrio Logan had different concerns.

Christopher, 29, and Crystalanne Colonna, 27, said they hadn’t heard of the council’s plan, but Chris said, “That’s a good idea. I think you should do that.” They are concerned about having living quarters by June 21, when Crystal is scheduled to deliver the couple’s baby.

“There’s another lady in there who’s four months pregnant,” said Crystalanne. “She needs a place, too.” 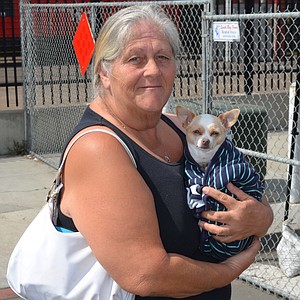 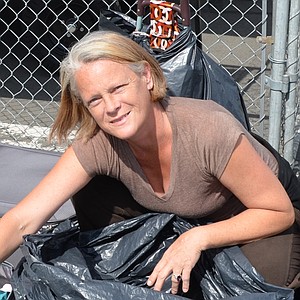 Lila Thompson, 65, also hadn’t heard of the plan, but she has more immediate concerns. When the tent closes on April 1 and most of its 200 residents are back on the streets, Thompson said she will have to sleep in her truck with her dogs.

Stephanie Skinner had arrived at the cream-colored temporary-housing tent at the intersection of 16th and Sigsbee to pick up the large black trash bags holding her belongings.

“I think it’s great. They should do it,” said Skinner, 42, who was moving a few blocks away with her friend, Susan Johnson. Skinner and Johnson hadn’t heard of the year-round housing plan for the city’s homeless. They were just happy to be joining the PATH program at Sixth Avenue and A Street.

Tim Reed, who had been living in the temporary housing since it opened November 1, hadn’t heard of the plan, either.

“It’s a good idea,” he said before inserting earbuds in his ears and walking away.

Sounds like a good idea but all you will get is more homeless. If you could wave a magic wand and provide every homeless person in San Diego shelter word would spread and you would have twice as many people wanting free housing and services. It is all well and good to want to help the homeless but you first have to understand why they are homeless. Unless and until the cause of homelessness is understood and remedied all you will get is more and more homeless wanting more and more services.

Umm most poorly written story. Really, were is the content? what is the point? Your article lacks actual useful information. If you ask any homeless person if something is a good idea they are going to say yes when it has to do with getting off the streets. They can't see what is past the vale of a promise of a new shelter. In actuality, it is not a new shelter or new beds added to existing beds, it is beds already existing and being renamed.They will move out more homeless to move in new homeless. This is not a solution or movement towards a permanent shelter. and another thing the names in the photos of the two women are incorrect, do your home work. I can't believe the Reader allowed this article to be printed.