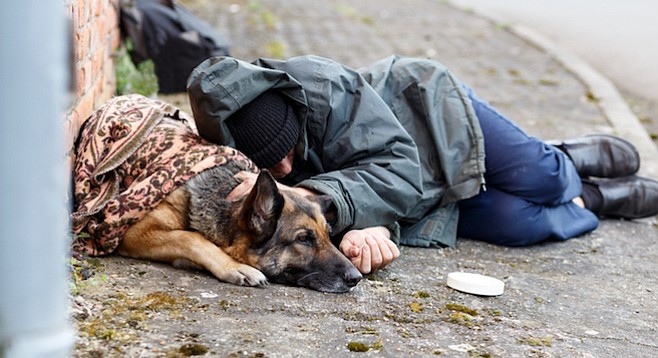 Normal Heights residents remain frustrated and angry over the recent influx of homeless people in their neighborhood — which city staff say was prompted by the downtown streets bleaching to ward off hepatitis A.

The November 7th Normal Heights Planning Group had near-record attendance from residents who say they are extremely concerned over the crime and contamination that homeless people and camps bring with them.

“Especially with hepatitis, we want to protect our families,” said John Hartley of North Park. “Are we just moving people around?”

On social media, residents say they’ve seen more people camping in Ward Canyon Park, in alleys and canyons, and they are especially angry about a group that hangs out near the Adams Avenue Recreation Center. They’ve called police many times and regularly update each other about the “criminal homeless” and what they’re driving, saying the people they are watching are involved in burglaries, including the bicycle thefts that plague the area.

City councilman Chris Ward, who represents Normal Heights and North Park, indicated that his office is getting complaints.

“While we don’t have any data, we’ve certainly heard concerns from community members throughout the district that some of these individuals have moved into surrounding communities and I understand the frustration it’s causing,” Ward said in a written statement. “My office has been working with city staff to ensure we get sanitation everywhere it’s needed and that police are adjusting their presence to reflect changes in the homeless population that are impacting neighborhoods.”

The initial push began in September and seems to be continuing. San Diego police did not respond to requests for information first submitted on November 17 and repeated via phone and email.

Michael McConnell, who advocates for the homeless, says the downtown sweeps are driving people into the neighborhoods.

“The new aggressive policy started about two months ago under guise of hep A,” he said. “It was just a chance to push people out of downtown because bad publicity was hurting tourism.”

Eddie Reynoso, from the Hillcrest Business Improvement Association, said Hillcrest was affected as people were pushed out of downtown. “What we heard is that once the police round-ups started downtown, people began looking for other places to stay,” he said. “That’s how serious the situation was in the days following the clampdown on tents.”

The security team hired by the Hillcrest Business Improvement District has proven effective, he said. The team works to make personal contact with homeless people and tries to find them services, including housing. The association has successfully linked 16 people to services including transitional housing, Reynoso said. “It helps our members feel our dollars are being put to good use.”

Homeless people who don’t want help tend to leave the area because of the security team’s persistent efforts, he said, which may be why the population is increasing in other neighborhoods. With the first of three industrial tents to house homeless people (at 16th Street and Newton Avenue) scheduled to open tomorrow (December 1), people are hoping the homeless will leave the canyons and alleys of Normal Heights and head back downtown.

More than 210 people have already moved into the city yard/campground at 20th and B streets, according to city spokeswoman Katie Keach.

“I’m surprised it hasn’t already [drawn people back],” McConnell said. “When we had the winter tents, there seemed to be a buildup downtown before they opened. I just think the police are too aggressive right now and it’s keeping that from happening.”

A quick and important correction:

The statement: “I’m surprised it hasn’t already [drawn people back],” she said. “When we had the winter tents, there seemed to be a buildup downtown before they opened. I just think the police are too aggressive right now and it’s keeping that from happening.”

was NOT made by Katie Keach, director of the city's Communications Department. Homeless advocate Michael McConnell made this statement.

The Reader is in the process of make that correction.

Has Pete Wilson returned? He drove them out of concentrating downtown and spread them out everywhere else. Not a solution, but had the appearance of one

Am I wrong in believing the homeless issue spiked when the gentrification of East Village began?

I don't think you are wrong.

I'm glad I left for greener pastures before it all went to crap.

Just curious. Where did you move to?

North Park, but it then went to crap too...although I moved for different reasons. All I can say is that while we all should be more civic minded and get involved in our communities, the way the sociopolitical and economic system is run keeps us in a rat race and more or less purposely hinders our ability to make changes in an ideal time. If more people got involved changes would happen, but people need to understand that planning improvements might take up to, though hopefully not, a decade to reach fruition. Just look at City Heights, why does the area behind Pancho Villa Market get referred to as City Heights West now? Miss North Park, miss San Diego...but what the hell sometimes you can't help but reminisce and then get saddened by the facts. When you live outside of the bubble you can see all sorts of solutions, but you can't do a thing about them while living outside of it...terrible paradox, sight without being able to act.