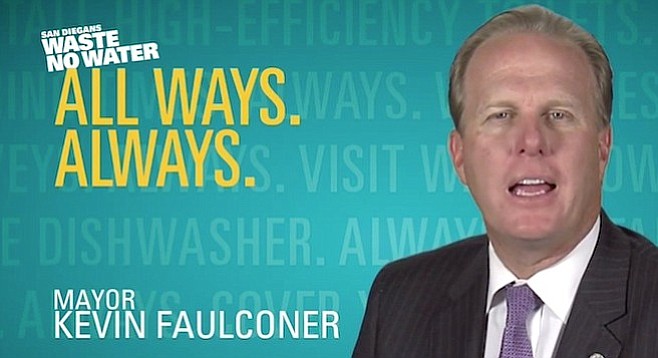 After being abruptly pulled from the city's procurement website two months ago, San Diego mayor Kevin Faulconer's $1.6 million anti-drought public relations campaign is back out for proposals, as costly as ever.

As first reported here, the former PR man issued an initial call in April for a pricey media consultant to assist "in informing the City’s customers about the need to conserve water as well as drought messaging."

The prospective tab was considerable: "The allotment for contract expenses has been approved for a range of $1,000,000 to $1,600,000 over the course of five years."

In addition to related promotional duties, the high-priced helper was to "identify press opportunities and media partnerships," to promote the mayor's water agenda.

As in the case of other state politicos, the deepening drought has offered the Republican mayor the opportunity to pontificate on the need to build costly new recycling plants, including the city's long-contemplated toilet-to-tap plan to convert sewage into drinkable water.

"The governor said he would speed up the approval process for projects that increase local water supplies," said a news release from Faulconer after an April 28 meeting with Democrat Jerry Brown in Sacramento.

"That's great news for San Diego as we begin work on the largest water recycling program in the state and create our own independent, drought-resistant water supply."

Turning an environmental crisis into a big-money development opportunity is a priority for the mayor, who is widely thought to have have his eyes set on higher office, and the revised PR plan appears to be designed to provide him with plenty of exposure.

"Up front development of a specific theme is a critical component in the formulation of a drought advertising and outreach campaign, and sets the tone for all forms of marketing communications throughout the campaign," the revised request says.

In the media manipulation department, the prospective consultant is to "help identify press opportunities and media partnerships" and "provide support as needed for press conference or campaign related events," as well as to "coordinate location shots and sites for interviews."

It also outlines the terms of consultant compensation, "including all reasonably related expenses, in an amount not to exceed $1,600,000.00."

Responses are due August 5.

People who have been here awhile know it's hot and dry, climate is scientifically getting hotter. My lawn is dead for a long time and my car never gets washed. I don't let water run much for dirty dishes or showers. Why is there an expensive new water-wasting fountain half a block long at the county building that runs for a few people and kids downtown most of the day? Tourism? Faulconer is in the empty space inside his head. Now it's fire season. We don't have water? Pipes can't support the fire system/old or non-existant hydrants, trucks or plane drops that will be needed. Homes will burn again and for no good reason. Piece of shit leadership.

Why can't the city just put messages on the programmable freeway message signs? I doubt that would cost much at all--let alone $1.6 million.

Faulconer could use his in-house flack(s) to simply issue press releases every few days that would be picked up by the local media. Then, every time he is on a platform or behind a lectern making a speech, he could make sure he mentions some facet of water conservation and the drought. I'd guess that most or all of the city councilpersons would be willing to do the same. Add in city staff, many of whom make public appearances, and the word could be spread at little or no additional cost to the city.

So, why not do that? I wish I knew, but this sort of overpriced and over-hyped campaign is now seen as mandatory in the city and the county.

Kevin was our council rep here and his decisions led to San Diego being dubbed 'Fly City' because tourists tend to visit Mission Beach, where his halving of garbage pickups led to an explosion of summer flies that ruin the experience for many visitors.

These flies did not exist prior to Kevin's decision to 'serve our community' by cutting garbage pickups in a heavily touristed area down to once a week. The fly population exploded almost overnight.

He did nothing to improve the infrastructure while the population of Mission Beach tripled. He allowed the beach to be bought up by out of state folks who see it as a hotel, but made no requirements for extra parking to accommodate the huge influx of residents and weekly rental tourists that fill them.

When I called his office to bring this issue up, their response was for many longtime Mission Beach locals to park at another parking lot one mile away and walk.

His signature piece as our representative was to send us all a letter in 2009 in the height of the recession,, using city money, to congratulate himself for using emergency city money to fund a few last months of double pickups - during the winter after the stock market crash when there were NO TOURISTS anywhere. Just when we needed it most.

This guy is a self-motivated lightweight who has no concern for the people he thinks he 'serves.' He is a PR machine whose only real interest is his growing political career as Doug Manchester's public mouthpiece.

Get him out of power before this airhead damages anything else. We need a manager with a vision for the CITY'S future instead of their own future. Why is that so hard to find in San Diego?

See the last paragraph of my recent post at http://www.sandiegoreader.com/news/2015/jun/29/ticker-pro-golfer-mickelson-brings-gambling-fore/#comments

This will be just a $1,000,000 PLUS give away to a PR firm that the Mayor wants to make himself look better to the public.

This is what his "MESSAGE" should be: WASTING CITY MONEY is even worse than WASTING WATER

The real question is: IS SAN DIEGO WISE TO SAVE WATER* by using City Funds?

From almost exactly 5 years ago

Founder has found it! Riot in the streets is the only way!!!

Twister - I don't suggest riots but I do think that if we all used more water then it will force our elected Leaders to actually do something sooner instead of turning a blind eye to what is now happening which is them standing bye while the big water users get lower rates, while the rest of US pay more while trying to use less!

Are building permits still being issued?