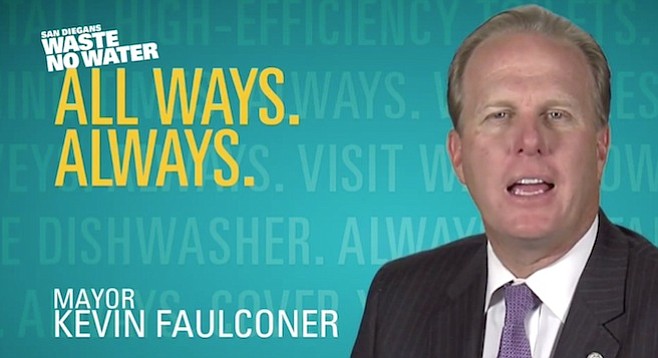 If anyone ends up happy about California's drought, it may be the recipient of a new $1.6 million PR contract from the City of San Diego, already noted for out-of-town promotional pilgrimages made by ex–public relations man mayor Kevin Faulconer.

An April 2 request for proposals says the city is seeking "As Needed Consulting Services for Public Information and Outreach for the Water Conservation Program."

According to the solicitation, "The selected Consultant will provide strategic planning and support to the City of San Diego Public Utilities Department’s public information and outreach efforts on an as-needed basis to the Water Conservation Program for five years, starting in 2015."

Adds the notice: "Both the Mayor and City Council have made it clear that they expect a thorough drought outreach campaign to notify citizens of the ongoing drought restrictions. The work that will be performed by the selected Consultant will assist the Department in informing the City’s customers about the need to conserve water as well as drought messaging."

The high-priced helper, says the document, will aid the city in its efforts to "negotiate media buys" and "identify press opportunities and media partnerships."

In addition, the consultant will "provide guidance as needed to Water Conservation staff in securing water use efficiency articles regarding new programs, incentives and opportunities to conserve water," and "provide support as needed for press conference or campaign related events."

According to salary information provided by the city after a request under the California Public Records Act, Puetz received total gross wages of $129,812 from March 28 to December 19 of last year. Awbrey, who had previously been on Faulconer's city council staff before shifting over to the mayor’s office, got a total of $131,873 during the year, the documents show.

As reported here last month, the Republican mayor took his environmental show on the road with a trip to Sacramento to tout his version of a climate change plan. He has also appeared in a video promoting a “Waste no Water” cell-phone app, yielding more friendly media exposure.

Additionally, Faulconer has traveled to the East Coast to appear on cable TV news shows and to Memphis for a national Republican event.

Underlying the mayoral PR trips and tabs, some paid for by the city, some picked up by the GOP, has been speculation by many, including Sacramento Bee columnist Dan Walters, that Faulconer aspires to higher office, sooner rather than later.

We have a call in to Awbrey for more details.