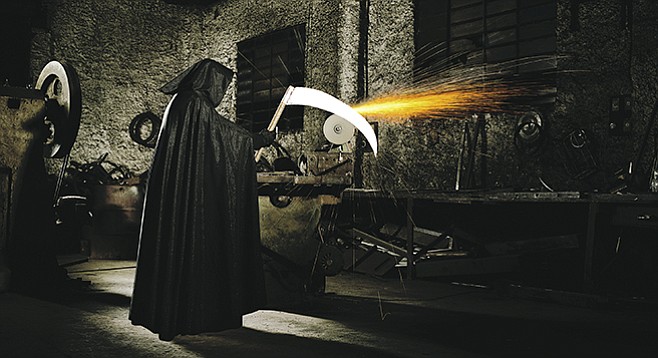 We all have a little genocidal maniac inside

People are “just joking” about locking all the hipsters up — right?

I read the Reader regularly enough to notice the absolute flood of letters coming in from people on all sides of the issue regarding pit bulls. Is “inundated” too strong a word? I don’t have much of an opinion on the dogs, but the angry letter writers strangely got me thinking about hipsters. I thought that it was weird how people will joke about “killing all the hipsters,” and nobody blinks an eye, but if someone potentially impugns a breed of dog, hardly advocating mass extinction, well, then, put on your offended pants! What’s with that? How is it okay to joke about murdering, beating, exiling, or imprisoning an entire group of people?

Like Shakespeare’s “first let’s kill all the lawyers” line, people are “just joking” about locking all the hipsters up in special hipster prisons without access to PBR, obscure music, and vintage clothing. I imagine such a terrible place would have mandatory mustache-shaving rules, and the prison uniform would consist of Birkenstocks, cargo shorts, and Aeropostale rugby shirts with permanently popped collars. Cigarettes would still function as currency, but there would be no American Spirits.

It sounds like the worst place imaginable, but there’s a plot twist. The fact that people are “just joking” means that they don’t really mean it, and saying things you don’t really mean is kind of ironic, and things that are kind of ironic are also kind of hipster, so advocating the mass punishment of hipsters is actually a very hipster thing to do — “Hey, check out my ‘Hipster Death Brigade’ shirt,” said the suspiciously hipster gentleman!

Of course, by that logic we all have a little genocidal maniac inside just waiting for a socially acceptable opportunity to sneak out. Say you were to replace the word “hipster” with “Greek-American pizzeria owner” or “Mexican farm worker” on someone’s “Die Hipster Scum” bumper sticker. Not so funny anymore now, is it? There aren’t enough lol jk jks in the world to excuse that, unless the bumper-sticker owner belongs to a fringe hate group dedicated to saving America from Greek-American pizzeria owners. In that case, all one of his friend probably think it’s hilarious, though my point remains at least 99.9% valid.