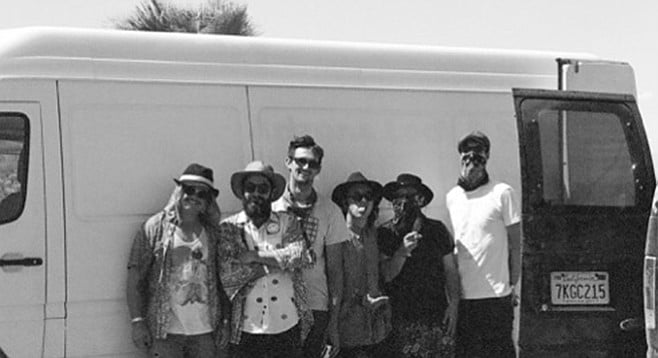 San Diego pysch-rockers did DIY, this time they want a record label

Seeing Wild Wild Wets live is more of an experience than a musical performance. The psychedelic rock group, which describes their sound as a post-punk, krautrock version of Velvet Underground, has a full-time projectionist in the band. During live shows, John Kelley is tasked with translating the live music into a visual slideshow and transforming the show into an all-out psychedelic experience.

“Kelley has been our projectionist since day one,” emails vocalist and keyboardist Mike Turi. “I wanted to make sure that the band was a whole package of audio and visual energy. [Kelley] has put countless hours into it and has grown with us.”

Before shows, Turi sends Kelley a set list, and from there the visual artist is free to translate the sounds into colors, symbols, and a trippy slideshow.

“We’ve suggested certain [visual] vibes, but after that, it’s all him.”

Live shows are integral to Wild Wild Wets. Two years ago, Turi and the Wets launched the San Diego Freak Out parties, a sort of psychedelic potluck party at venues featuring local and touring bands all with a psych-rock bent.

“We held onto 14th Floor for a while. We shopped it around and wanted to have it released properly by a label, but after some time we knew we had to get it out, so we could focus on the tracks we were writing for [our follow-up], Prisom.”

Turi and the band are currently recording the new album at L.A.’s Seahorse Studios with Chris Kasych, who has recorded Wavves, Vampire Weekend, Haim, and Bruce Springsteen.

Turi says the band learned a lot from self-releasing 14th Floor, and despite still putting the final touches on Prisom, they have begun the hunt for a label to put the album out properly.

“We are almost finished recording [Prisom]. We are sending it to labels and we hope to find somebody who loves it as much as we do. It’s a bit of a waiting game.”