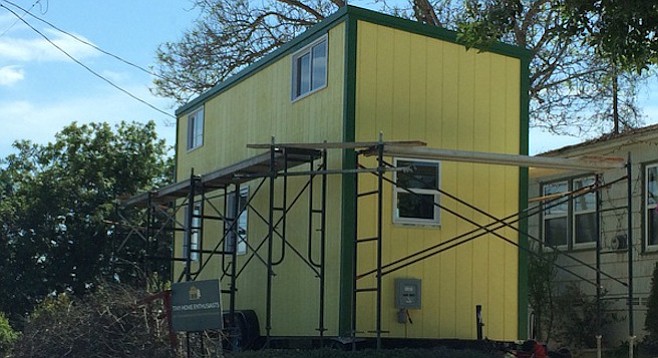 How small can a small house be?

It’s the kind of change that gives tiny-house supporters hope. On June 4, new zoning rules will go into effect that make it easier to build small, detached homes on city lots outside the coastal zone (which varies in width from several hundred feet in highly urbanized areas up to five miles in certain rural areas,” according to the California Coastal Commission website). 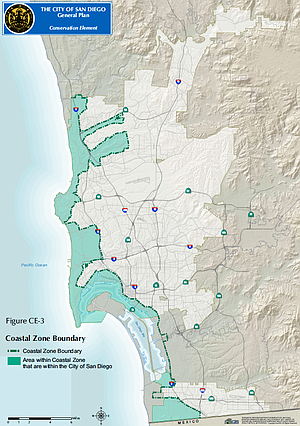 The new rules will also take effect inside the coastal zone within five months, according to Dan Normandin, a senior planner with the city.

The Small Lot Subdivision Ordinance “will radically change the way people live in San Diego,” says Candace Vanderhoff, an architect who built a tiny house in her South Park yard. The structure makes a good office but Vanderhoff thinks it could also make great affordable housing.

“I have found most people interested in tiny houses cannot afford much more than a tiny house,” Vanderhoff says.

One goal of the new ordinance is to provide more compact, affordable houses in neighborhoods zoned for apartments and condos. But when it comes to the houses built on those lots…how small can small be? Normandin says the smallest detached dwelling is an efficiency space of 150 square feet; a shoo-in for most tiny housers. He expects that homes built under the new ordinance will be about 500 to 1200 square feet. A developer could build smaller, he says, but with the high cost of land, “why would they?”

While tiny homes were once seen as a health and safety concern — a view critics say is part of the whole outdated zoning problem — now, as many people are priced out of housing in populated areas, the definition of "small" is shrinking.

In Seattle, micro-sized “apodments” (tiny apartments, some in the 100-square-foot range) are among the rental options. And almost three years ago, San Francisco downsized its definition of an efficiency dwelling unit from a living room no less than 220 square feet (along with a separate closet and bathroom) to 150 square feet (plus kitchen and bathroom facilities).

“Given the lack of supply for affordable housing,” San Francisco city planners said, this was one practical solution.

Ali Fattah, a senior research engineer with San Diego’s Development Services department, says that while a tiny house on a foundation is not forbidden, the challenges are room-size requirements and zoning constraints on lot configurations. The new regulations permit a lot to be subdivided in keeping with the area’s allowed density. Since lots configured for condos hold many more units than several small houses would, tiny homes wouldn’t exceed the density. But could they underwhelm the traditional neighborhood?

In places where “model communities” of tiny homes have sprung up, like Washington DC, their odd scale has mostly intrigued people. (“They’re so darn cute,” as Vanderhoff says.) To sidestep zoning restrictions, such homes are typically placed on wheels to fall under the rules of the road — as RVs. The homes offer mobility but are destined for temporary parks with high rents and the fringes of the county, far from jobs and urban amenities — the opposite of what they’re meant to be.

This year, Sonoma County is likely to open its first permanent RV park for tiny houses. The village, named “Napoleon’s Complex,” will work as a co-op with a small monthly upkeep fee. Some San Diegans would like to do the same thing here.

“I would like to think that even with the high cost of living, there must be people who would make a low-interest loan to a group wanting to buy land for this,” Vanderhoff says. “I’d love to get my older single women friends to create a village so they can care for each other as they age.”

She’s not alone. The San Diego tiny-house Meetup community has grown to 402 members. Danielle Drummond of Lemon Grove is one of several people building, and helping each other build, tiny homes in the county. They aren’t legal, she says, although it’s a claim some experts call a myth.

“San Diego has strange rules, and they vary by city,” says Drummond. When she first sought to build in La Mesa, she learned the city’s rules required “a permanent foundation, fire sprinklers, and a septic system, whether I use it or not.” Also, the buildings on the property could not take up more than 60 percent of her parcel, and she had to include an enclosed two-car garage. However, there was no minimum square footage.

“If I travel 20 miles east to the city of Alpine, laws are a little more lax in the country.” Tiny houses are still not permitted, Drummond says, “but I see a ton of people living full-time in RVs.”

Drummond doesn’t want to be the only tiny home on the block.

“I absolutely would prefer a community, and [to] be able to do what I want with my own land when I do purchase it,” she says. Her goal in the next two years is to build a community of “informed citizens who just want to live the way they choose without it being against a lot of antiquated laws.”

On June 6, the group will host a guided tour of all the tiny houses in the county, from people with trailers who are just getting started to those in the framing stage or now living in one that’s nearly finished. She’s not worried about what the new ordinance will or won’t do.

“I’m not sure if the city will pay attention to us as a small group,” Drummond says. But the more people who build, “the more change will have to happen. I’m not worried about if, really, but when.”

Candace and Danielle are truly visionary activists who behold destiny. With San Diego burdened with the most expensive housing market in America, visa vie wages earned, necessity, as the mother of invention, is alive and well.

I guess I'd rather see these then the old crappy apartments currently in North Park and South Park.

The RV industry produce a product called a Park Model. It is built to RV standards and is designed to be placed in RV parks. They are 399 sq/ft or less. They consist of a bedroom, bathroom, kitchen w/ eating area and a living room. You can get one with a built on porch. If these were allowed as a Granny flat they would sell fast. In most places the building industry has opposed these being placed anywhere but a RV park.

I would disagree that for many a tiny house is all they can afford. Many of us are choosing to live "Tiny" and spend our time and income on other things. I'm building a small home with an incredible view and why spend all my time maintaining a huge home and paying to heat/cool space I'm not using? Nope, would rather be in a Tiny Home and spend time outdoors and traveling instead of cleaning and paying a mortgage.

My fear is that once government realized they can't tax Tiny Homes in the same manner they can larger homes (per square foot) they will figure out some way to raise taxes on them.