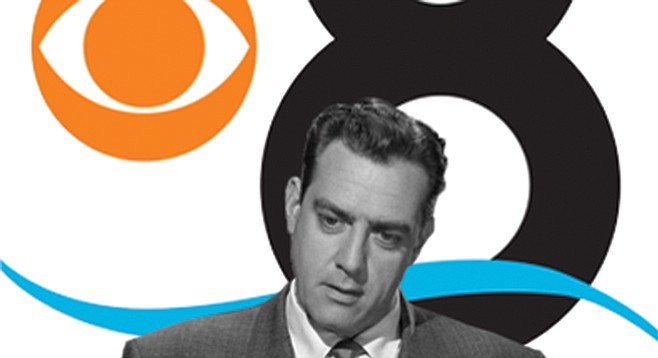 Television station KFMB, run by wealthy La Jolla Republican Elisabeth Kimmel, has been having X-rated issues with federal regulators of late. According to a June 1 letter from the station’s Washington lawyers to the Federal Communications Commission, a complaint was filed by Gregory May Jr., alleging “an episode of Perry Mason on KFMB-TV’s digital sub-channel 8.2 included captions that changed a character’s name from “Dick” to “XXXX.”

KFMB tracked the problem down to a programming vendor called MeTV. A company representative informed the station that MeTV’s closed-captioning software “apparently is unable to determine when potentially offensive words are used in a context that is not offensive.”

Since KFMB didn’t know about the glitch, the letter goes on to assert, the station “cannot be held to have violated the Commission’s captioning rules.” Besides that, KFMB says, “annual gross revenue from digital sub-channel 8.2 fell below the $3,000,000 mark for 2014,” thereby exempting it from the closed-captioning law anyway.

La Jolla city council candidate Joe LaCava has joined the long line of other city candidates with an early fundraising kickoff of his District One council campaign.

“Any amount you can give, $25, $50, $100 up to the city contribution limit of $550 per individual, and $1100 per couple will help and will be appreciated,” says an emailed invite to a June 28 launch party and fundraiser at the Bird Rock residence of David Garrity and Leslie Davis, who has been chair of the Save the La Jolla Post Office Task Force.

Some think of La Cava as an ambitious Dick, but he is a Joe.

This wouldn't be the first time a "dick" passed from Ray Burr's lips.

Are you implying that Raymond Burr was a head of his time?

If all this weren't treated as a serious matter, it would be hilarious. Actually it is hilarious, but in these PC times, we must not laugh, guffaw, or chortle.

It is all the more hilarious because it IS treated as a serious matter. It ain't funny--it's pathetic. What a WASTE!