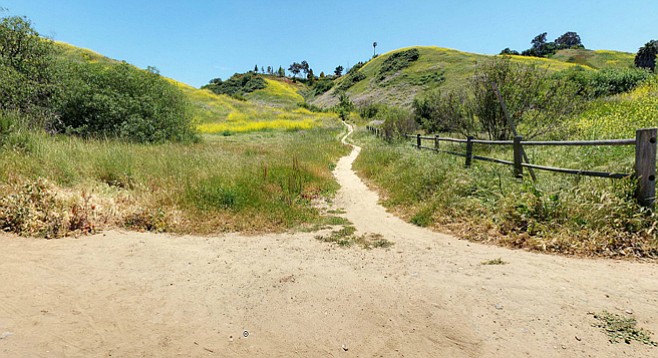 No trolley in my backyard

A group of neighborhood conservationists in University City are hoping to put the brakes on a plan to extend trolley service from downtown San Diego's Santa Fe Depot to a new transit center in University City.

Friends of Rose Canyon has long been a thorn in the city's side when it comes to transit projects. In 2007, the group filed several lawsuits challenging a plan to build a bridge over the canyon. The city eventually acquiesced. Late last year, the conservationists celebrated a city decision to pull the project from the community plan.

The group now has their sights set on shutting down a proposal from San Diego Association of Governments and the Federal Transit Administration to lay 10.9 miles of new track from the Old Town Transit Center along Interstate 5 to a stop at the University of California San Diego. The track would then head east down Genesee Avenue, ending at the Westfield UTC mall.

San Diego Association of Governments, a regional planning and transit agency, plans to use Transnet sales-tax revenues and federal government funding to pay for construction. The agency expects service to begin in 2019.

In a new lawsuit, Friends of Rose Canyon claims San Diego Association of Governments failed to follow environmental guidelines before the project was approved. In particular, the conservation group says the report failed to address encroachments on park land, a reduction of views, destruction of wildlife habitat, and increased noise from the trolleys, among other concerns; those concerns, according to the lawsuit, were ignored while drafting the final report.

Those supporting the trolley extension say the project is needed to address future growth. According to San Diego Association of Governments estimates, population along the corridor is expected to increase by 19 percent in the next 15 years. During that same time, employment in the area is expected to grow by 12 percent.

"The Mid-Coast Corridor Transit Project will expand transportation capacity in the corridor to accommodate existing and future travel demand, particularly for peak-period commute trips," reads a fact sheet from San Diego Association of Governments' website. "The project will provide an effective alternative to congested freeways and roadways for travelers and will reduce vehicle miles traveled."

Friends of Rose Canyon are asking that a judge order a stop to the project until impacts to the environment are adequately addressed. In addition, the lawsuit seeks to invalidate the now-approved environmental impact report.

On January 26, attorneys for the Federal Transit Administration requested the case be moved from San Diego Superior Court to the federal courts.

This could have been predicted. It may succeed, or it may not. The plan for the trolley to parallel I-5 north to UCSD and then bend back and head southwesterly on Genesee to UTC has been out there for a long time. But the exact alignment wasn't set until more recently. I'd always assumed that it would stay east of I-5 all the way to that small piece of the campus that is east of the freeway, and then head to UTC. Instead the plan is to have the trolley cross I-5 and serve the VA complex and central campus before heading around to UTC.

In either case, UCSD has long been a major impediment to the plans. The campus has a massive parking problem weekday mornings. The rest of the time, not so much so. So, one might expect some desire to provide alternative ways to get there to work or attend classes. It was a long time coming. Despite the complaints, most UC campuses seem happy to charge big fees to park on campus, and then enforce them with Gestapo-like zealotry. Only recently did UCSD sign on to this trolley plan.

About twenty years ago there were some UTC neighbors who were complaining loudly about having the trolley on the street for a few blocks. They said it would be both dirty and noisy. Dirty? It runs on electricity, folks. Noisy? Except for the warning "quacker" horns, it runs almost silently. You'd rather have noisy, smoke-belching buses, of which there are many in that area?

UCSD has been strongly opposed to the trolley for a long time. The obvious spot for a trolley stop on campus would be the Price Center but that was opposed due to some laughably absurd reasons (claims about magnetic fields, claiming the center of campus was actually East of the 5). My guess is campus leaders don't want random "riff-raff" showing up but they're not honest enough to just come out and say that. UCSD has tended to be holier-than-thou about environmental issues while being opposed to the trolley and unfriendly to cyclists.

Bill, that's what I've been thinking all along, but hesitated to say. Overall, the UC tries to have it both ways, the environmental advocates, but keeping their upper-crust, park-like campuses far from the "madding crowd" and from the masses.

I didn't know UCSD admin had opposed this before. Do you know where I can find out more? Thanks for the comment.-dH

Correction: In the passage above, I should have said southeasterly on Genesee.

"transit center in University City." should read "transient" as the Trolley brings the riff raff to the area. All crime goes up near a Trolley station. The trolley is a great idea but is diminished by the trolley trash that uses it.

Where was the protest when they built UTC, The Gilman Drive mess, extended Genesee, and Highways 52 and 805? Cities grow, get over it or move out like I did. The University is on public land and paid for with tax money; they should have no say in the matter. How about a little more research on the story, who is funding "Friends of Rose Canyon"?

The Friends of Rose Canyon are just a group of privileged NIMBYs living on the west end of University City whose favorite moves are environmental lawsuits to preserve the benefits of their little enclave at the expense of the greater good. Through a succession of environmental law suits the Friends of Rose Canyon delayed the planned construction of the Regents Bridge across Rose Canyon connecting the two sections of Regents Road, forcing traffic on to Genesee Ave for at least 40 years. Not only that, being privileged with money they heavily supported the city counsel members who were wiling to help prevent the bridge construction. Now they have successfully ran up the cost of the bridge and gotten the Mayor to go along. The big claim was to protect the creatures and plants in Rose Canyon, at least the tough little survivors of about 80 years of regular trains passing through the area belching smoke and other noxious fumes, plus more recently, the traffic on Interstate 5 running through the area. The environmental claims are just a pretext for maintaining their close to private access and enjoyment of the area. They want it all their way regardless. I just close my windows to avoid the noise from morning traffic on 805 and 52 waking me up.