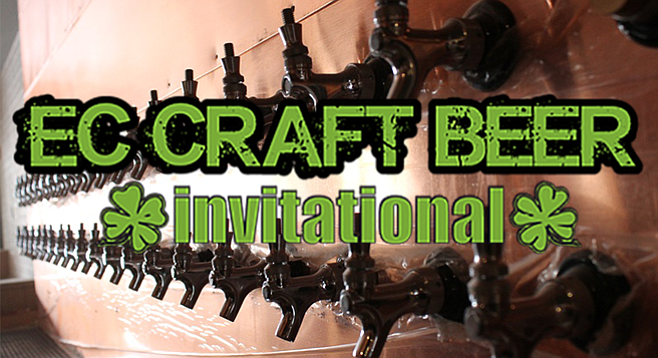 When URBN St. Brewing Company installed its brewpub in the former home of El Cajon Brewing Company, one of partner Alex Carballo’s major goals was to help move the craft beer needle in East County and attract more lovers of fine ales and lagers to the region. Now, as a board member for a special event, he’s joining with collaborators to realize a new goal: To create the most elite festival in San Diego County, redefine St. Patrick’s Day and create an upscale alternative for beer aficionados. The vehicle for that is the EC Craft Beer Invitational.

Scheduled for March 15 (the weekend prior to St. Patty’s Day), this first-annual fest will feature the liquid wares of brewing companies selected for the quality of their beers. The early list of breweries that have signed up includes Acoustic Ales Brewing Experiment, Green Flash Brewing Company, Groundswell Brewing Company, Monkey Paw Pub & Brewery, Mother Earth Brew Co., and fellow East County operation Twisted Manzanita Ales from Santee. Also scheduled to appear is South Park Brewing Company, which hasn’t yet opened, making this one of the first opportunities to taste their beers.

The EC Craft Beer Invitational will take place in El Cajon on the corner of Magnolia and Main Streets. There is a plethora of ticket options, including a “VIP Designated Driver.” This is the first time non-imbibers have been afforded additional amenities, which include access to food, VIP lounge and VIP restroom. Also available is a V.I.B.E. (Very Important Beer Enthusiast) ticket including access to the aforementioned lounge where specialty kegs from participating brewers will be tapped. Tickets are available online and a portion of proceeds will benefit St. Madeleine Sophie’s Center.