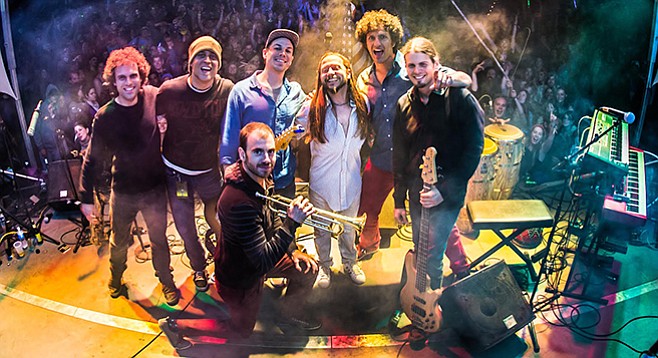 For those of you who missed out on acts like the Bar-Kays, the Dazz Band, Cameo, or the whole of the semi-disco dance floor ’80s in general, there’s the Motet. Some of you have not heard these sounds since polyester was new. Some of you have not heard them at all, but no matter. You feel your way around this music, generally with your feet. That generation’s R&B was mass produced with a single intent: to wear out the soles of an audience’s shoes. Listening, therefore, was an active sport, and the Motet play it that way. With the issue of 2014’s self-titled album, they have emerged as a down-and-dirty funk band, albeit one dressed in jeans, flannel shirts, and baseball caps. Still, they manage to capture what it was like back in the day when rap was a novelty and Michael Jackson had just pulled off his first moonwalk on national television.

What keeps it real, as opposed to mere tribute, is that the Motet (which is actually a sextet) is made up of trained jazz musicians who have a jam band’s internal guidance system. They can take you right down that hole and into the lost time zone otherwise known as the extended jam just when you least expect it.

Keller Williams and the Motet

Lift the hood and look at the inner workings of the band’s previous recordings and you hear jive, funk, jazz, and some Fela Kuti covers thrown in. To keep things from getting dusty there are brief flare-ups of techno or electro-acoustic noises. They’ve been called a world music band during their 17-year run, and an Afro beat band as well. It all depends on exactly when you became a fan, for the Motet has tried on many somewhat-related genres. In that respect, Motet may be this band’s most cohesive work to date. Today? It’s a new Motet, keeping the party from 1982 going strong.