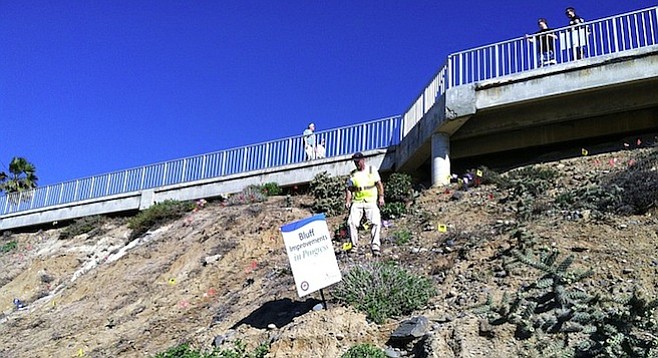 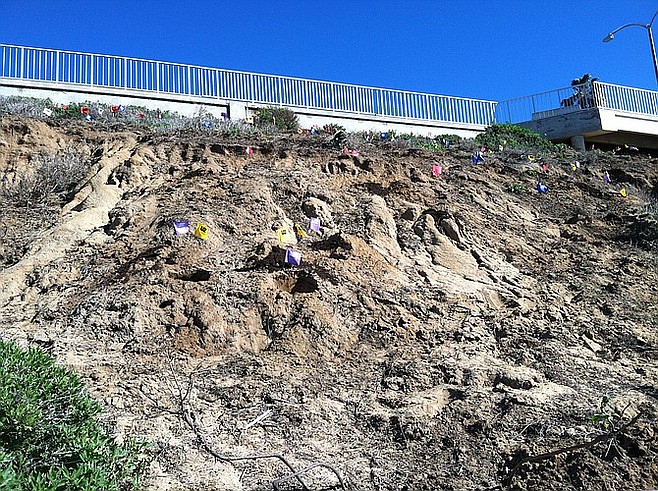 The City of Carlsbad has partnered with the California State Parks to improve the bluffs between Frazee and Tamarack State beaches. Non-native plants have been removed, trash and debris cleared, and a new irrigation system has been laid out. Now the steep hillside will be filled with 500 plants that are appropriate for this windswept portion of California coast. 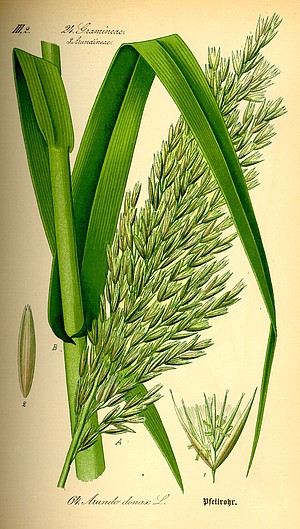 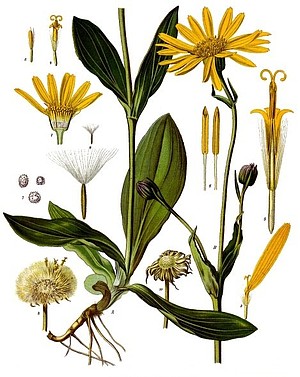 Walkers and joggers on the lower seawall trail have watched as work crews removed invasive ice plant and Arundo, along with concrete and asphalt chunks. Indigenous plants with their fragile footholds have stayed rooted, and ground squirrels still scamper amid the remaining bushes of native Arnica and cholla cactus.

Dave Marriott, a landscape designer with Nissho of California, was planting small flags throughout a portion of the bluff when he stopped for a chat this week. His firm has been contracted to perform the bluff-restoration work, along with volunteers who are being recruited by the city to pitch in. He gave interested passersby a quick overview of the project.

“We’re in the process of doing a slope renovation,” explained Marriott, “so we eliminated all the invasive species and now we’re restoring California natives — 17 different species, which will add splashes of color and stabilize erosion. We are planning on being done in a couple of weeks and in about one year this slope should look spectacular! It’s going to take a little while because we are only planting one-gallon plants, but it will look really cool soon.”

Additional improvements for the area, which is located off Carlsbad Blvd. between the north end of the Ocean Street parking lot to the south end of the Tamarack Avenue parking lot, include a low fence to deter trailblazing, 20 new benches, 5 new picnic tables, 10 trash and recycling receptacles, a remodel of the restrooms at the foot of Tamarack, as well as a new shower and drinking fountain.

According to the City of Carlsbad website, the project is being funded through $665,000 of the city’s Capital Improvements Budget and $234,830 from the Agricultural Conversion Mitigation Fund, which is financed by developers who pay a fee of $10,000 per acre whenever they take agricultural land out of production.

Volunteers are needed to assist with planting today, January 10 from 8:30–11:30 a.m. For more information, see the City of Carlsbad event flyer.