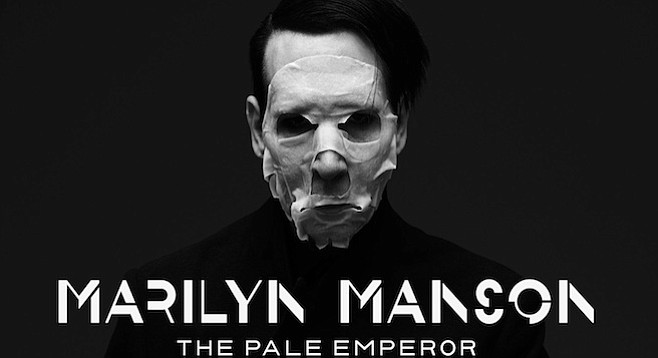 When Marilyn Manson first sauntered onto the music scene in 1994, he represented all the repressed fears and anxieties of white America. Gaunt, ghoulish, and grotesque, Manson reveled in the macabre debauchery and anarchistic devolution present in songs such as “Cake and Sodomy,” “I Don’t Like the Drugs (but the Drugs Like Me),” and “The Beautiful People.”

Now, 21 years and 9 albums later, Manson has lost that mystique that enraptured listeners so long ago and has gone from being an evil bogeyman to a run-of-the-mill garden gnome. Manson’s latest album, while a step in the right direction, is muddled by poor songwriting and a lack of depth. The opening track, “Killing Strangers,” sounds like a lazier retread of Manson’s gun romp “The Fight Song,” with inane lyrics like “We got guns/ Motherfuckers better run.” “Warship My Wreck” sees him spouting such high school poetry drivel as “Cut the hands off/ Then kamikaze into your soul.” It feels as if he isn't even trying anymore.

While Manson has never been able to hold a tune, his pissed-off snarl more than made up for his lack of ability. Now his voice sounds parched, as if he’s doing a nasally impression of Sesame Streets’ “The Count.” Yet, not all is lost for the Pale Emporer, as there are bright (gloomy) moments hidden in the garbage. Tracks such as lead single “Deep Six,” the hard-rocking “Slave Only Dreams to Be King,” and the goth-sexy “Third Day of a Seven Day Binge.” These moments prove that Manson still has some tricks up his sleeve, but he seems to be so settled in to his plush Hollywood life that he has become the thing he used to despise: a washed-out fame vampire.