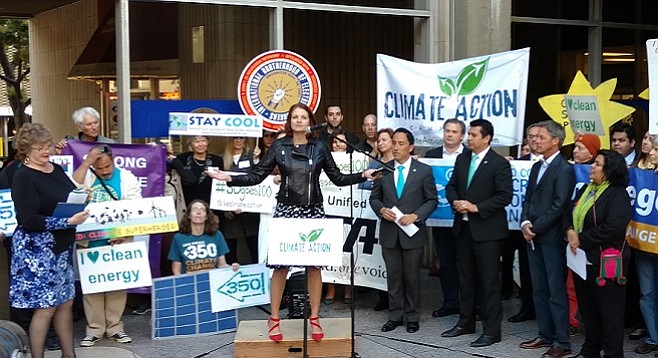 Goal: 100 percent of energy from renewable sources by 2035

Following years of planning and nearly two hours' worth of public comment on December 15, San Diego's city council voted unanimously (8-0, with councilmember Scott Sherman not attending) to approve a final climate action plan for the city.

"Our goal should not just be a majority vote, it should be a unanimous, bipartisan vote," said councilmember Todd Gloria at a rally staged outside city hall before the council meeting. Gloria began developing the plan's draft while serving as interim mayor. “While we may take a vote today to commit the city to this, what matters the most is the implementation. I want to make sure other councilmembers are as committed to this plan as we are."

He repeated his appeal after 95 speakers, 93 of them expressing support, addressed the council in its chambers

"It takes everybody in the community coming together and deciding that we're going to tackle the biggest challenge in human history, because that's really what it is," said Nicole Capretz with Climate Action Campaign, one of the more vocal activists in recent months lobbying for the plan's approval.

The most ambitious goal in the plan calls for the city to switch to generating 100 percent of its energy from renewable sources by 2035. Other targets include a move to mostly electric cars in the city's fleet, planting of more trees, and increasing access and appeal of public transit.

The next step, one that activists and policy experts alike fear may prove more difficult than enacting the plan, is funding its implementation.

"Hold us accountable," Gloria urged rally attendees. “Make sure that we implement this plan, because when we do, it will send a strong message that San Diego is ready to lead when it comes to climate change.”