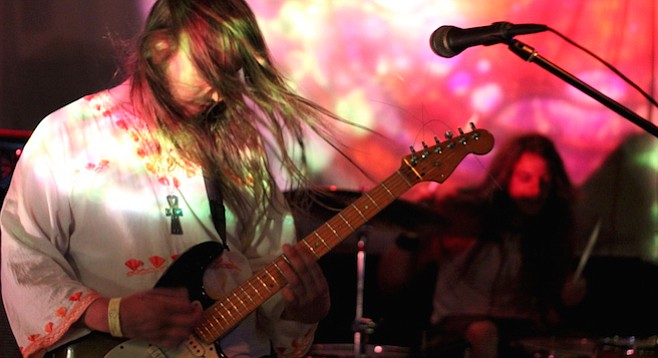 One night in a Tijuana parking garage

Rumble Fest stumbled but went the distance, and then some

More than a dozen Baja and southern California bands came together atop a parking garage for Rumble Fest Tijuana. The second edition of the DIY-defined event offered a location that’s also the best view in the city: Pyramid at the Foreign Club parking lot (which cost $8 per day to park) off La Revu.

Like many Baja music festivals, an air of worriment hung over the event. The day before the festival, a status update on Rumble Fest Facebook page read, “Do or Die,” betokening the bureaucratic and organizational unease of Tijuana. This wouldn’t be the first fest shut down by authorities in Baja, some close to the organizers thought in the days ahead of the event.

Twelve dollars U.S. (190 pesos) to get in at the door, the music started around 2:15 p.m. with San Diego’s Rever, which features a guy called “Van Diego,” since he lives in his van on both sides of the border.

Some highlight acts of the day were Angel Peralta Project (Tijuana), La Diabla (Tijuana), San Pedro El Cortez (Tijuana), and Furcast (L.A.) and the festival’s top-notch sound equipment and lighting made it feel like you were at a corporate-sponsored festival.

The police presence disappeared around 2 a.m., and the festival broke curfew by a couple hours. The crowd shimmied and swayed to Radio Moscow as if there were disturbances in the electrical activity of their brains. Hands, feet, legs, and chairs flew as people tried to climb onto the unbarricaded stage.

Like the All My Friends festival, Rumble Fest suffered from a disinterested scene too cool to show up to the shows until 9 p.m. Sets ran late, and some people snuck in thanks to the laissez-faire customs of Tijuana. One thing is for sure, Rumble Fest happened, and for 15 hours the “If you build it, they will come” myth rang true.