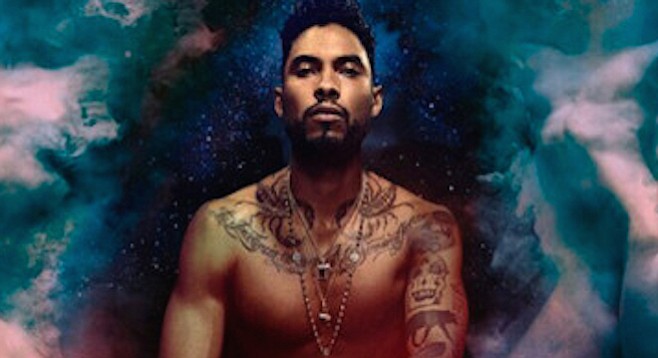 The Grammy-winning R&B artist takes the stage at the Observatory on Tuesday, September 1

Warning: listening to Miguel’s Wildheart in mixed company might make you blush.

...off of Miguel's latest, Wildheart

Outside the bedroom, Miguel’s focus shifts to his native Los Angeles. From the live-fast-die-young album opener “a beautiful exit” to the fuzzy guitar-driven “Hollywood Dreams,” about fleeting fame in the City of Angels, the songs aren’t so much hometown tributes as gritty reality checks.

Lead single “Coffee,” percolating over morning-after sex, and a remix of Girls, Vol. 2 soundtrack carryover “Simple Things” (the best of three additional tracks on the 16-song deluxe edition) are the album’s commercial high-water marks, but Wildheart’s less obvious hits also deserve a listen — such as “face the sun,” which begins with Miguel’s breathy vocals in an echo chamber and builds to a “Beautiful Ones” frenzy until climaxing with a blistering rock guitar solo courtesy of Lenny Kravitz.

Not everything on Wildheart works (you can skip the overcomplicated “DEAL,” the drum-heavy assault of “damned,” and the repetitive “leaves”), but the provocative album succeeds in revealing the risk-taking artist and not just the hit-maker in Miguel.