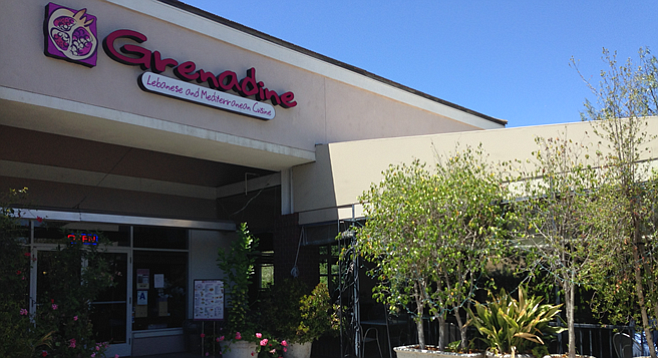 Work has often brought me to Poway over the past couple of years, so I’ve driven past this strip mall at the intersection of Pomerado and Scripps Poway Parkway at least a hundred times. Maybe two hundred. There’s a gas station there, and a bank. Until recently there was a Carl’s Jr., but it closed. I’d never once noticed a small cluster of restaurants braced against a hillside at the shopping strip’s western corner. I was amazed to discover they exist.

That Carl’s Jr. was the only thing you could see from the street, aside from the pumps of Chevron. If a friggin Carl’s Jr. failed at the front of this location, what chance do the other restaurants have?

I’m hoping Grenadine can make it. The Lebanese eatery opened less than a year ago and has done a splendid job making the interior seem removed from its surroundings. A high ceiling and wide floor plan contribute to a clean, airy atmosphere, and a partially enclosed dining patio has enough decorative flow to ignore the parking lot just beyond it. 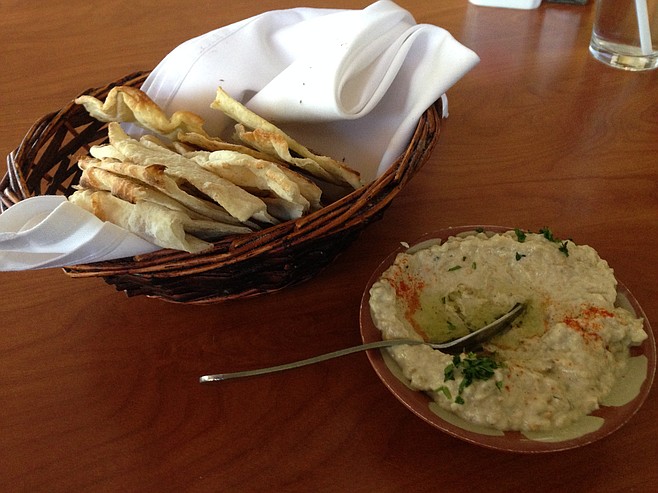 Baba ghanoush and a basket of fresh flat bread

Perhaps more importantly, the Mediterranean bistro bakes its own bread. As regular readers might know, I started with baba ghanoush. I’m always on the lookout for a good rendering of this eggplant staple, and Grenadine’s won me over. Though it leans heavily on both garlic and tahini, I devoured the $5.50 half-order without complaint, particularly enjoying the basket of warm pita slices and crispy zaatar-encrusted flatbread that accompanied it.

A little research tells me zaatar gets used on a lot more than just bread and that it often incorporates roasted sesame seeds, thyme, sumac, marjoram, and oregano. While they wouldn’t tell me their recipe here, it definitely starts with thyme and sesame, and the heavy dusting of herbs on the crispy wafers boosted my enjoyment of the ghanoush and tasted great on their own. 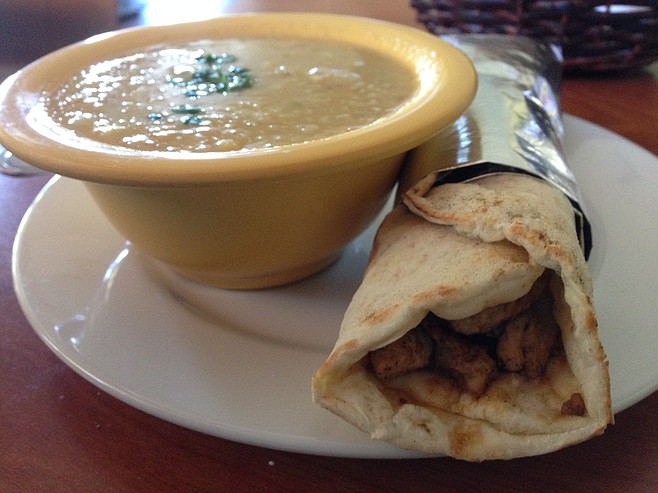 A bowl of dry soup and a tasty chicken shawerma wrap

For my main dish, I thought I would escape the baba ghanoush and shawarma rut I seem entrenched in when it comes to reviewing Mediterranean restaurants. However, when I asked my server to suggest something, she responded with “chicken shawarma” faster than I could say “recommendation.” Who am I to argue? I ordered a chicken shawarma wrap and expected the best.

I got it with a side of lentil soup, which wasn’t bad, considering lentils have the uncanny ability to make even soup taste dry. The wrap itself was simple — just marinated chicken cooked over an open flame, tomatoes and garlic paste rolled into a fresh pita. The chicken cooked well, and the tomatoes actually contributed flavor — not the watery, mushy sort of tomatoes you’ll find at lesser restaurants and markets. The garlic paste tied everything together.

For $8.75 I might have expected something more substantial, or at least a wider variety of toppings, but we’re talking about a strip mall restaurant in a business park opting for quality ingredients while trying to survive where even fast food fears to tread. If Grenadine can’t find a way to make it here, it’s at least worth noting there’s sister restaurant Amardeen, over by UTC.