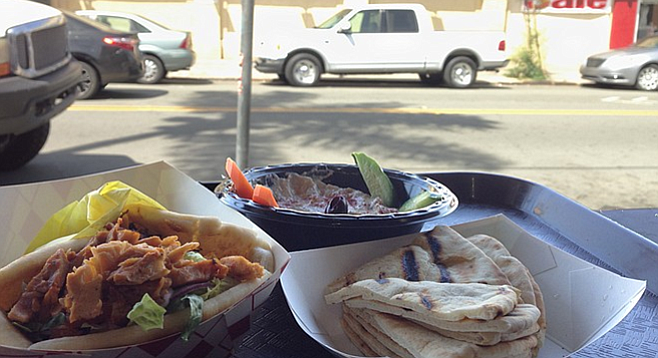 OB Kabob brings down the price

My years spent living in OB left me with fond and muddled memories, and in my head nothing ever changes around Newport Avenue. Of course many things have happened since my move inland, so while in my head the shop space next door to Winston’s is a tattoo parlor combined with a hair salon, apparently it’s been a kabob shop for a couple years. Upon noticing this, I dropped in for lunch.

I found myself facing the usual Mediterranean lunch decision, falafel versus shawarma. The woman working the counter steered me to the chicken shawarma sandwich ($6), which I paired with an order of baba ghanoush ($5). That part was easy, because I pretty much order ghanoush whenever I spot it on a menu or in a shop, whether I really want it or not.

The cheap prices weren’t lost on me. This is OB after all, where a few lingering restaurants still hold on to a cash-only mentality. 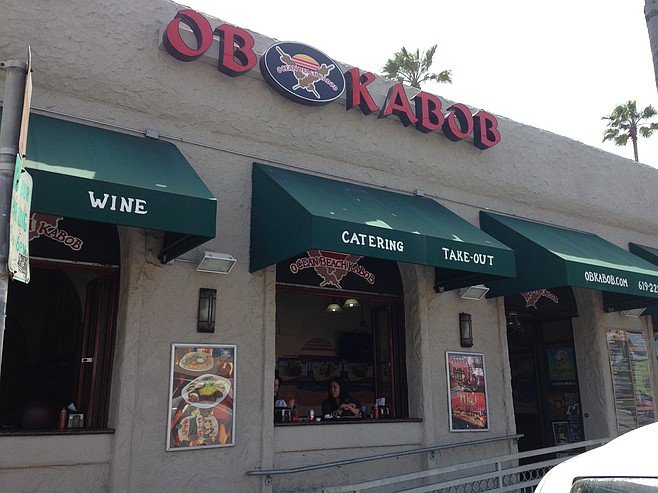 It's a kabob shop now. (You can still get ink and a haircut a couple of shops over.)

Of course, this isn’t one of the tried and trues. It’s much newer than Newport Pizza, Barbecue House, Poma’s Deli, or Livingston’s Chicken. I’m kind of surprised, actually, that a new place could open up here in the twenty-teens, under current property values, and still offer budget fare to a neighborhood that is, despite the best efforts of its laid-back citizenry, in the middle of a prolonged gentrification.

So, something’s gotta give, right? That six dollar shawarma didn’t really inspire me. Don’t get me wrong — it went down easy. It had flavor, generously stuffed with diced, spiced, and sauced chicken. It just wasn’t great tasting chicken, having a little graininess that suggested it was cheap enough to still be profitable in a six buck sandwich, despite block-from-the-beach rents.

The baba ghanoush fared better — finely pureed, not stringy, and ultimately tasty, served with warm slices of slightly crisp grilled pita. I think if I’d gone with the falafel or possibly the eponymous kabob, I might have come away with a better muddled memory of the place. As is stands, I did enjoy eating there on a very Obecian level — I got a cheap lunch, which I ate while sitting at a window counter facing the street, watching the daytime crowd of regular irregulars strolling Newport and adjacent blocks on a sunny afternoon.

I might not quite belong in OB anymore, not the way I used to. But in a lot of ways OB Kabob seems to fit right in, with its amateurish beachy murals lining the walls and its okay-but-not-perfect food.

Still, next time I’m going for a meatball sub from Poma’s.