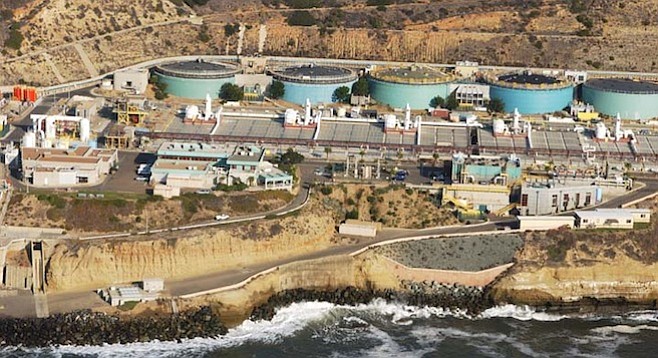 Crime, fraud, and miscellaneous malfeasance may be taking a major turn for the worse at San Diego's city hall, judging from the most recent Quarterly Fraud Hotline Report from the city auditor.

But because of state law, the April 2 report by city auditor Eduardo Luna maintains, few details are available to the public.

"The primary objective of the Fraud Hotline is to provide a means for a City employee or citizen to confidentially report any activity or conduct — related to or involving City personnel, resources, or operations — for which he or she suspects instances of fraud, waste, or abuse," notes the report.

Names and other specifics are kept secret.

According to the document, hotline complaints during the first three quarters of this fiscal year, which ends June 30, totaled 88. During the same period of the previous year, 42 allegations were received, an earlier report shows.

Little information about the pending matters are provided, but based on the descriptions that are available, more than a few of this year's charges appear to be of the big-money variety.

Cases that the auditor lists as "open/unresolved" include a February 6 allegation that "there is no oversight of a large contract for services," and a September 17, 2014, charge of "fraud related to the City's contracting process."

An October 1, 2014, complaint, asserting "an employee who works for a vendor that does business with the City has committed fraud in the past," also remains unresolved. In addition, a January 12 allegation that "a supervisor is allowing some employees to steal time," is still open.

Violations that were substantiated during the quarter included a January 16 "allegation that City employees were sleeping while on City time." The report says, "Appropriate corrective action was taken."

On January 29, it was alleged, "that a non-City official had a conflict of interest and failed to recuse him/herself." Says the document, "The department sent a reminder regarding the relevant Council Policy to all interested parties."

The auditor bagged his biggest miscreant this February, with the sentencing of an unidentified city employee caught last year running a six-figure shell game out of the wastewater department's warehouse operation.

"The Office of the City Auditor received a Fraud Hotline complaint alleging that since 2011, Public Utilities Department’s Wastewater Treatment and Disposal warehouse employees have been making excessive purchases of equipment and supplies," recounted Luna in a March 18, 2014 report.

"Supply items, including batteries, were purchased in excess of the inventory records of supply items being received."

Continued the auditor, "The investigation identified $243,683 of supply item purchases for which no inventory records of the items being received were found. The investigation also verified the admissions of a vendor who stated that goods and cash were provided to a city employee to maintain a business relationship between the vendor and the City."

Following Luna's investigation, a city employee, who was arrested and charged with seven felonies, pled guilty to a single count of grand theft in July of last year.

"On February 19, 2015, the former City employee was sentenced to 3 years of formal probation, 365 days in custody (to be served as work furlough), and ordered to pay the City $161,686 in restitution," the auditor's April 2 report says.

Alice is confused here, down in the Rabbit Hole of America's Finest City. Who the heck wrote the CA shield law that prevents miscreant municipal employees from being identified along with their misdeeds in an official audit by the City? And why is that a good thing?

What about the court records?

Just curious, is there any news on that committee for the 100 year celebration of Balboa Park--several million dollars were reported to have gone missing, with nothing to show for it. Didn't the committee members just move on to other comfortable positions?

Might be interesting to learn if any missing funds were ever tracked down. At the time, it didn't seem that anyone knew what had happened.

As a matter of fact they did move on to other comfortable position. Gerry Braun is now the official mouthpiece for City Attorney Jan Goldsmith. His partner-in-scam Julie Dubick was hired by GafCon whose owner sat on the Board of Directors for the BPCI Inc. She may have moved on by now. These are typical of the Downtown insiders and former Mayoral staffers for Jerry Sanders who seem to continually leach off the Public Teat.

Dubick basically accomplished nothing while at BPCI, and she received a huge salary. There's no penalty for failure or incompetence with these people.

While we're talking about taxpayer ripoffs by unidentified City employees as well as more notorious one like Julie Dubick and Gerry Braun, it was announced today that the City of San Diego will be paying out $1.3 million to victims of ex-cop Christopher Hays who served only five months in prison for assaulting two women while on duty. And that's in addition to $8.2 million recently awarded female victims of ex-cop Anthony Arevalos who's in the slammer for eight years. That's almost $10 million, folks. And they're thinking about making homeowners pay for trash collection?

It is good to remember that while the above mentioned costs to the City of SD (and its taxpayers) are really high they are "but a drop in the bucket" when compared to the multi-billion dollar rip off that the CPUC is determined to have SoCal ratepayers pay for, instead of the shareholders of SCE (and SDG&E) who caused the problems at San Onofre! It is past time to start "calling out" each of our elected Officials, because they are also looking the other way to retain their cozy relationship with these powerful Utilities that are also very big donors, instead of publicly standing up for all of US. Because of the size of this rip off many now refer to it as San Onofre Gate....

==&gt; #SanOnofreGate. (This new Twitter hashtag will allow you to keep up to date on the ongoing investigation into the multi-billion $ SCE-CPUC ripoff). Just enter the above hashtag into the Twitter search box: https://twitter.com/search?q=%23sanonofregate&src=typd More info posted here: http://m.sandiegoreader.com/news/2015/apr/23/ticker-utilities-tiers-proposal-passes-cpuc-judge/#c185567

Look into the City property records and discover how much of the great art that used to grace the walls of City Hall and "executive" offices is left. Probably worth millions . . .