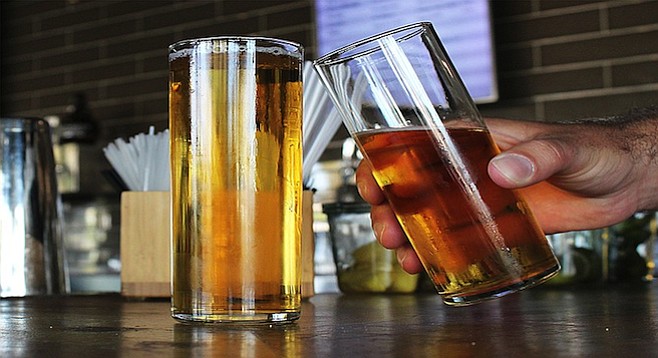 Whatever you say, Bagby

Helping in the conceptualization of some interesting brews as part of my Beer to the Rescue lupus awareness campaign has been an amazing experience. A saison infused with yuzu and lemongrass, an imperial stout with chocolate and orange peel, a Belgian-style singel brewed with rhubarb — that’s pretty creative stuff! So you can imagine how psyched I was when Jeff Bagby, the most award-winning professional brewer in American history and owner/brewmaster at Oceanside’s Bagby Beer Company agreed to participate in the campaign.

From ales to lagers, pale ales to porters, double IPAs to session brews, the guy has the goods to make good on any beer style he sets his mind to, so the sky was the limit. When I reached out, he asked me what I thought about brewing a Kölsch-style ale, also noting that he had a slew of English and American hops that could be used to make any kind of pale, amber, red, or brown ale, throwing in that we could also go the stout route. It was pretty obvious the Kölsch was what he wanted most, so I suggested going with that, but adding some rye to add some spice to the finish on that effervescent Germanic beer style. He wrote back and said he really wanted to stick with a traditional Kölsch. I said, cool!

Hey, when Jeff Bagby’s brewing a beer to help you out, you abandon the whacky, nouveau beer pipe dreams and get onboard quick. And I’m glad I did, because the resulting ale, Bagby of Kölsch, turned out lovely. Light in color and body (though a bit bulkier in the ABV category for this style at 5.5% ABV), it dances refreshingly on the palate and pairs well with the coastal breeze and ocean views, both of which are regularly on tap at Bagby’s two-story brewpub. Of all the Beer of the Rescue brews, it’s the most palatable for a wide variety of people. Even macro drinkers would easily recognize it as beer, making for one of those “gateway beers” many craft fans point to as the brew that was gentle yet flavorful enough to convert them from Bud, Coors, Miller, and the like. Funds raised for lupus and new fans exposed to the glories of artisanal ales — not bad. Not bad at all.