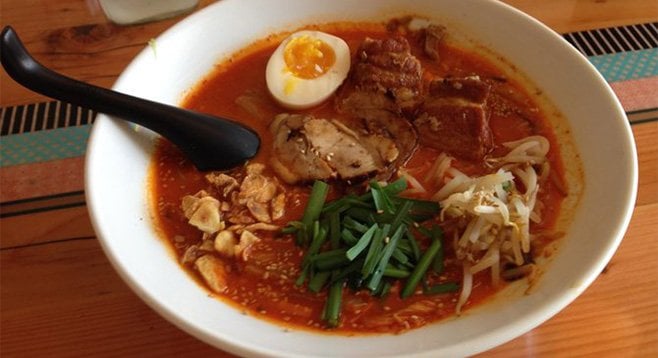 Tajima lives up to its reputation 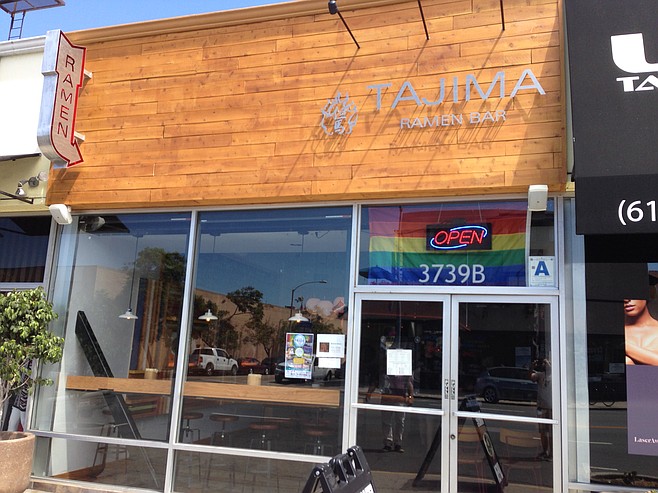 As far back as I can recall, every restaurant at 3739B 6th Ave — across from the Rite Aid — has been Japanese. I used to order from the "American Favorites" list back when it was Yakitori Yakyudori (which moved to Convoy Street, in case you ever wanted to try the skewered chicken hearts listed under Japanese Favorites). After that came Raku, in which I had a memorable date over a forgettable meal. There may have been others before, in between. But I get the feeling the latest may stick around.

Tajima's already got its name on a couple restaurants up in Kearny Mesa: an Izakaya and a Ramen House — which is pretty tasty according to this. For a couple months now it's been trying its brand here in the center of Hillcrest, with the distinction of being a ramen bar.

Tajima did a great job styling the place, hanging paintings of large kanji characters, building wood block patterns, and devising a long wood top bar with retractable hanging stools that swing out from beneath it. 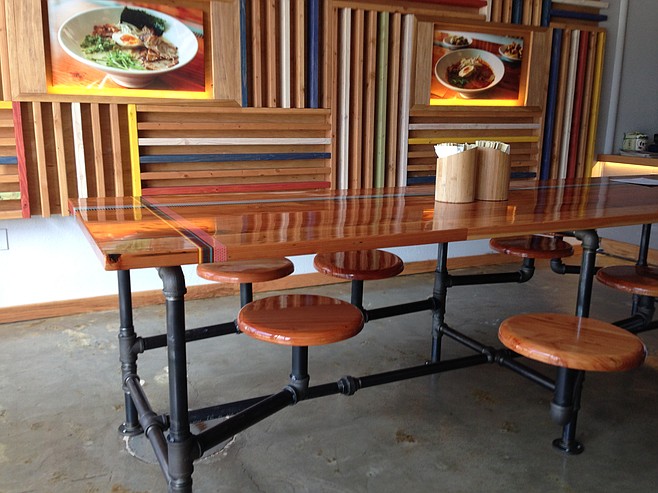 They serve ramen a few ways. Tonkatsu pork broth comes standard at eight bucks, with the inclusion of curry or spicy sesame paste for a dollar more. These bowls come with pork or chicken chashu and assorted toppings along the lines of eggs, bean sprouts and fried garlic. A vegan version offers miso broth, vegetables, tofu and a variety of mushrooms. You may choose between thin or fat noodles, or even gluten free. A number of additional toppings average about a buck or two each.

I went a couple of times, first trying the spicy sesame with added vegetables and kakuni pork belly. The fat noodles held onto the spice, which delivered more flavor than straight heat. I could have used more sesame, but then I always say that.

The kakuni was outstanding. I found it tender and easy to break apart with my chopsticks. I imagine if I left it in the broth too long it might just melt away so I ate it quickly. The chips of fried garlic gave me a few rich, smoky bites, and while the mushrooms and asparagus were lost in the mix flavor-wise, the textural addition worked out, plus let me get away with thinking I'd significantly amped up the nutritional value. 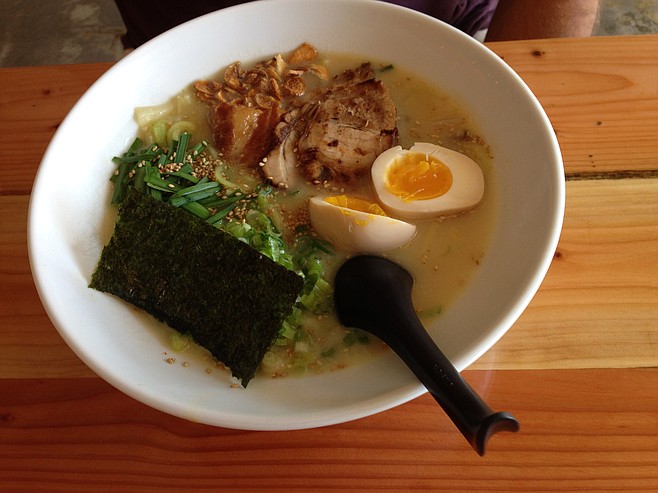 I went back to check out the Tajima bowl, unadulterated by the spicy red sesame paste. To mix things up a bit I added kimchee as a topping, and — what the hell? — tried out the gluten free noodles.

I know there must be a number of people out there who haven't enjoyed ramen since the great gluten aversion took over the public consciousness. So I checked it out to see how it compared to the fat noodles of my first dish. As I said, there're a lot of rich flavors at play here, so I didn't notice any great difference in that regard. The texture of the gluten free noodles was definitely more al dente, which, come to think of it, is how they were served at Raku as well.

Not my choice, but an admittedly savvy concession to the gluten-free audience, who get to enjoy a top ramen spot (I know).

The aglutenous will miss out, though – they won't get to enjoy Tajima's selection of Japanese craft beers. Bottles with names like Ozeno IPA, Wasabi Ale, and Kujyukuri weizen may be found — about eight or nine alternatives to the more common Asahi and Sapporo. It's enough to make me wonder whether I should review this as a beer destination with a killer ramen side business. Either way, it's a good fit in a location suddenly worth remembering again.