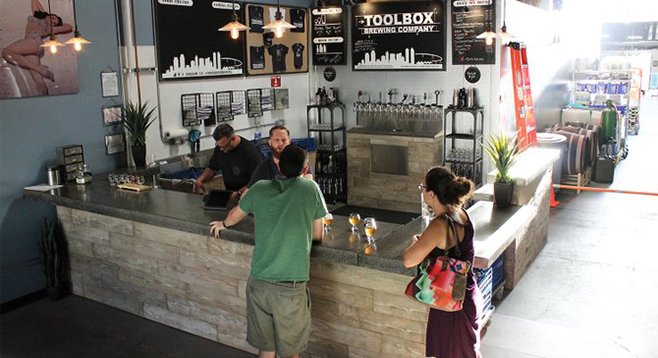 New Vista outfit is a center of wild yeast experimentation

These days, new brewery openings can feel very similar. Regardless of décor, back story and other defining characteristics, beers from new operations tend to be, for the most part, predictable. This isn’t because what breweries are producing in San Diego is boring. Quite the contrary. So many different styles are brewed throughout the county that avid brewery tourers are bound to have come across just about anything a new operation can throw at them. That is certainly not the case with the newest entrant to the brewery-dense city of Vista, Toolbox Brewing Company (1495 Poinsettia Avenue, Suite 148, Vista).

As reported in previous articles on this site, brewmaster Peter Perrecone has long been respected by his homebrewing peers for his expertise working with wild yeast strains, most notably Brettanomyces. Where others gravitate to hoppy beers or barrel-aging, Brett is his passion, and it shows through in the myriad offerings on the beer board at Toolbox, which celebrated its soft opening last Wednesday. So much so that Toolbox is to Brett what White Labs is to traditionally cultivated yeast strains. The latter operation has a tasting room where beers are fermented with numerous yeast strains so patrons can experience the flavors that each strain introduces to the finished beer. Perrecone’s creations allow one to get a grasp of the wide range of tart, spicy, fruity flavors that Brett infuses. Like White Labs, it makes for a very unique and eye-opening experience. 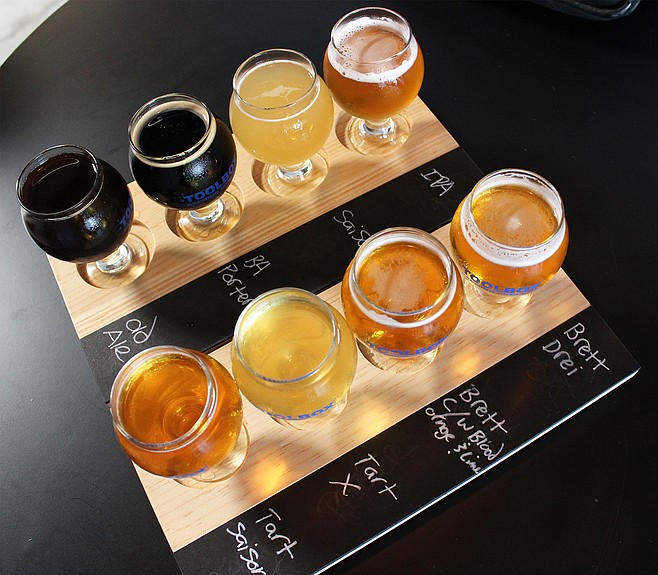 Four Brett-dosed beers were available the day I came in. My personal favorite was the Tart Saison, a 5% alcohol-by-volume (ABV) farmhouse-style ale that was excessively sour (the type of tart beer that brings on involuntary salivation) but pleasantly flavorful. It was also a bit salty, as was Tart X, a beer like none other I’ve tasted before, stocked with numerous strains of Brett as well as Lactobacillus. That beer changed twice over on my palate, going from funky to savory to dry as a bone. Tartness came on as the beer warmed up, but even without it, the beer was a rollercoaster ride for my taste buds. A saison with blood orange and kaffir lime zest smelled like perfume and tasted too heavy-handed, and another called Brett Drei exhibited the spice and dryness of Brett without any of the undesirable, plastic-like nuances that sometimes rear their ugly heads.

But Toolbox isn’t all about the Brett. They have a 7% ABV India pale ale that’s bittered with Amarillo, Mosaic, and Zythos, and dry-hopped with that trio as well as Nelson and Simcoe. The result is a really nice IPA that, unlike anywhere else in San Diego, will likely be overshadowed by other beer styles, including a Brett-infused IPA that was the first keg to kick just 24 hours after doors opened. Perrecone’s singular non-Brett saison is light and refreshing, but needs more dimension as it pales when compared to his stock of wild saisons. A 9.5% ABV old ale had all the dried fruit and molasses character one looks for in this style, but in an easier drinking package, while an 11% ABV vanilla- and coffee-infused porter that spent three months in Bourbon barrels was extremely intense, coming across like a decadent chocolate truffle with coconut from the barrel but not too much raw alcohol essence.

There’s room to improve and grow, but as far as first-time brews go, this was an impressive showing. Even more impressive is the adventurous MO guiding Perrecone and company to be worthy of the great deal of buzz Toolbox has already generated. In a municipality that’s now home to 11 breweries, this is easily one of the most interesting, and a must-stop for anyone looking for beer in Vista.

Nice! I'll have to check this place out.