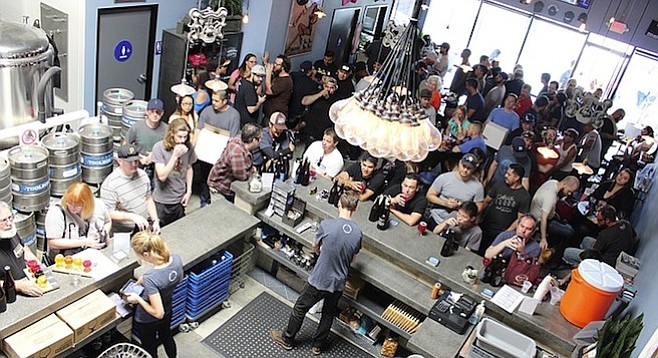 Not (yet) enough kegs from the Toolbox

Though my initial visit to Toolbox Brewing Company didn’t yield beers that cashed in on the brewery’s ultimate potential, they were promising, and I’ve made it a point to check out their beers whenever an opportunity presents itself. That effort has been rewarded each time, with tartly tantalizing Brettanomyces-stoked brews incorporating a variety of fruits. So, it was with pleasure and a bit of anticipation that I returned to their tasting room the week before last. What I found was a beer line-up unlike any other in San Diego County.

What started as a business offering a variety of Brett beers in tandem with numerous standard styles — IPA, saison, porter — has shifted to beers that are almost exclusively adventurous. Half the board consisted of sour ales, some fruited with strawberries, cherries, and blueberries. It was the one infused with the latter, X Lupus, that gave me cause to come back, as it was released as part of my anti-lupus campaign, Beer to the Rescue. Five-hundred bottles of that beer sold out in roughly one hour, based on the reputation of brewmaster Peter Perrecone’s previous sour creations. 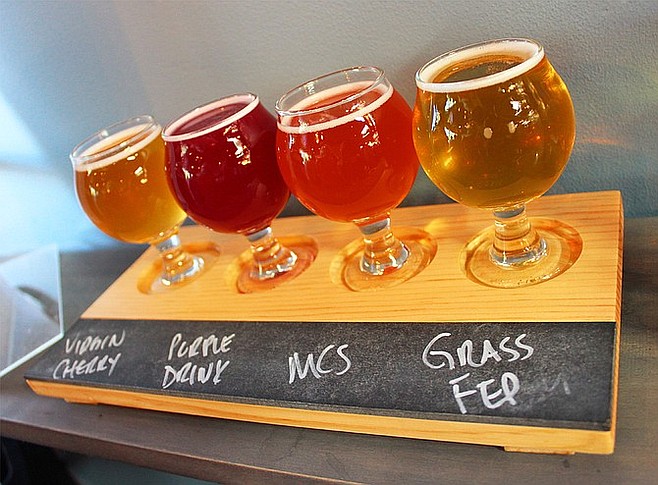 Two I had recently enjoyed were available: Tart X with Apricot, a 100% Brett-fermented sour flavored with the stone fruit, and Purple Drink, another brilliant acidic brew laced with boysenberries. They tasted as good as I remembered and fell along the same lines as the X Lupus. The fruited beer that stood out most was My Cousin, Strawberry. Instead of tasting mostly of strawberries, wild yeast takes the beer in many directions, displaying bright phenolic character and a bit of funk. Listening to commentary from Perrecone and customers around the tasting room, it’s Toolbox’s most polarizing beer to date. People either love it or hate it. I loved it.

I was also a fan of a dry-hopped blonde sour Brett beer called Grass Fed Lettuce, featuring all the vibrant taste bud play one expects from a tart offering along with a nose rich with hop botanicals. Hops are also at the forefront, as one would expect, with Toolbox’s Brett IPA, Last Call. Though it’s risky, Perrecone has abandoned his standard India pale ale, choosing to go whole-hog with his Brett program. It’s a tough row to hoe, but that beer — a difficult one to get right — is worthy of flagship status, and unlike any IPA available in the IPA capital of the world. Medium hop bitterness dovetails with wild yeast dryness and wide-ranging flavors that are hard to pick out but taste nice altogether. 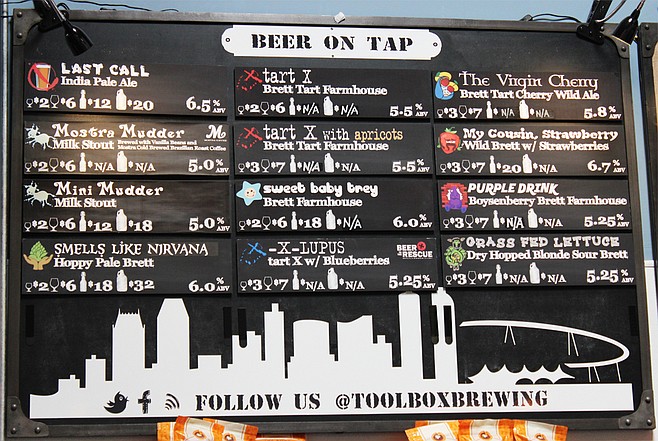 It’s hard to fathom how Toolbox will be able to make this avant garde brewing model work for them, but Perrecone is managing to keep enough inventory on hand to support the tasting room. There aren’t enough kegs to supply outside accounts, so more fermenters are on order and owners Amanda Elder and Spencer Peters are exploring smart options for expansion. On that front, they will soon combine their space with the business suite next door, using part of the increased square footage to essentially double the size of the tasting room. Judging by the lines around the corner when they opened for bottle sales, they're going to need all the space they can get.

On a side note... The original name of the beer was “The BLT (Blueberry Lupus Tart),” but it was changed (for the better) to “X Out Lupus.” The U.S. Alcohol and Tobacco Tax and Trade Bureau subsequently mandated that the word “out” be removed so consumers wouldn’t believe that drinking the beer would actually cure one of lupus. Classic TTB! Toolbox’s next bottled beer will be called Peachin’ Camaro. Let’s hope they leave that moniker alone.