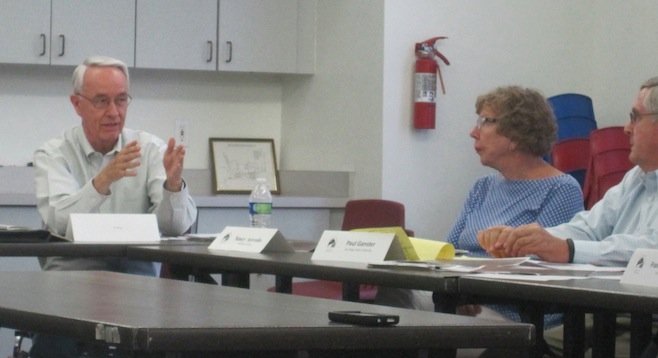 Former San Diego mayor Dick Murphy served on a subcommittee that recommended names based on locations rather than descriptions used by park patrons, such as “E Ticket” and “S Curve.”

The committee also recommended three park-equivalency projects that include a bike-skills park. Both recommendations will be voted on at the September 18 meeting of the Mission Trails task force, which consists of elected officials and advisory-committee chair Dorothy Leonard.

If the task force approves the recommendations, they will be added to the park master plan that is currently being updated.

Murphy, the committee vice chair, advised skills-park proponents that the projects are tied to the Grantville focused-plan amendment to the Navajo community plan. "In order to generate funds, the plan has to be adopted and implemented," he said.

The amendment allows residential development in areas including land around the Grantville trolley station. The amendment is scheduled for completion at the end of September or in October, said Jay Wilson, a committee member serving on Navajo Community Planners, Inc. A portion of development impact fees will be used to pay for park projects, said planning-department staffer Robin Shifflet.

The projects include a 12.5-acre skills park in the Deerfield BMX area and a 2-acre Deerfield Canyon Nature Park, and upgrading the 4.3-mile portion of the San Diego River Park trail in Mission Trails.

Before the committee vote, Ben Stone of the San Diego Mountain Bike Association said an online petition in favor of the skills park drew 726 supporters. When he asked proponents in the audience to raise their hands, nearly everyone did. The association said it would help obtain funding.

Park names were explored by a subcommittee consisting of Murphy, Mike Pent, and Richard Gadler. They recommended that Fortuna Mountain entrances be called the “East Fortuna Staging Area” and “West Fortuna Staging Area.” The committee agreed with Pent's recommendation to keep a sign stating the Tierrasanta park entrance was at the end of Clairemont Mesa Boulevard.

There were once plans to extend Jackson Drive beyond Mission Gorge Road, connecting it to Clairemont Mesa Boulevard. While that area is now in the park, ranger Mel Naidas said nearby land is called the “Jackson Drive Quarry.” Murphy said there was talk of renaming it “Bat Quarry” in honor of its inhabitants. Since the emphasis is on location, the name proposed is the “Southwest Boundary Quarry”; land known by that name would be renamed the “Visitor Center Loop Quarry.”

Near the Jackson Drive park entrance, a sign states that “S-Curb Trail” is ahead; that is considered a "typo," and down the road is a sign for “S-Curve Trail.” The committee recommended naming it “Suycott Valley South Trail.” Also proposed is naming land overlooking Shepherd Pond the “Shepherd Ridge Trail.”

Furthermore, the trail that cyclists call “E-Ticket” would be named “Suycott Valley Bypass” because it bypasses the valley and leads to Fortuna Saddle Trail.

Kim Wiley of the bike association spoke about association efforts that included trail restoration. He also talked about the meaning of E-tickets, which were once used for special rides at Disneyland.

Murphy said the committee appreciated "the work of the bike community," but it was "more practical" to use location names.

Pent said precedent was established when the “S” (for San Diego State) was taken off land renamed Cowles Mountain. It was "controversial, but we decided [the name] would not be the informal user use.”

Pent and Leonard were original members of the committee formed in 1978, Leonard said in a September 3 interview. The following year, Murphy joined the committee and has been a member except when he served on the task force (as a San Diego councilman from 1981–1985 and as mayor from 2000–2005).