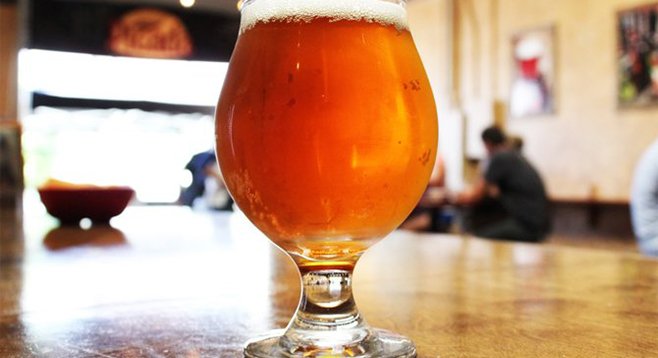 Vista brewery turns out what may be its best beer yet

It’s common for brewing company owners to be high on the skills of their brewers (ironically, I type this shortly after the head fermentation specialists at Barrel Harbor Brewing Company and Helm’s Brewing Company have parted ways with their former employers). So, when Claudia Faulk from Vista’s Aztec Brewing Company goes on and on about brewmaster Paul Naylor, it’s not surprising. That said, after tasting one of Naylor’s latest creations, Aztec Hop Serpent Imperial IPA, it’s easy to see why Faulk’s so enamored.

This 9.9% alcohol-by-volume double IPA may be the best beer in the history of this revitalized early post-Prohibition brand. Bitterness — a massive 103 IBUs (international bittering units) worth — is imparted by Cascade, Centennial, and Columbus hops. A substantial malt bill helps to balance all that lupulin bite, while Galaxy and Summer finishing hops give the brew nice peachy aromas and flavors evocative of dried, sweetened mango and papaya.

Aztec tends to apply Mexican spins and twists to traditional beer styles. That MO helps them to fit into the San Diego scene in an authentic way, but even without the addition of cinnamon, Mexican chocolate, or agave, this straightforward West Coast-style brew falls comfortably within the parameters of what hop-hungry drinkers expect — and look for — when it comes to San Diego beers. Naylor nailed this one. Get a taste Saturday, September 6 during Aztec’s three-year anniversary festivities at its tasting room (2330 La Mirada Drive, Suite 300, Vista).