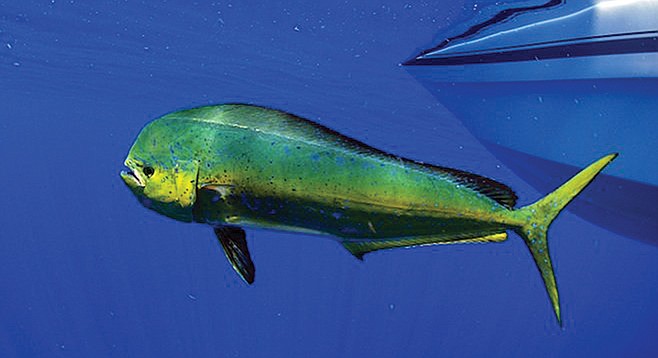 The dorado gave a bigger fight than the tuna

It was 5:45 a.m., and nine men stood in a group at the counter of H&M Landing. We were there to celebrate the bachelor party of our good friend by chartering a boat to take us out in search of fish.

On the dock, deckhands were pushing up carts loaded with yellowfin tuna and other fish. Our hopes began to rise. I had read of higher than normal yields of fish due to an influx of warmer water that made larger fish come closer to San Diego….

It was like looking down into the top of an aquarium at feeding time, with fish darting in all directions. The fish were fighting one another for my baitfish. Several times, I watched the bright colors of a dorado strike at my bait only to lose out to a quicker striking tuna. The tuna would then occupy a minute or two of my time with an exhausting fight.

After several attempts at drawing my bait away from other fish, I saw the strike. The dorado hit it! The strike wasn’t like that of the tuna; it was more intense. The struggle to get him aboard was more difficult and more trying. After fighting a dozen fish, I was exhausted. I reeled him close to the boat several times, but he sped back down to the depths. This went on a few times before I was able to draw the fish close enough to gaff and get aboard.