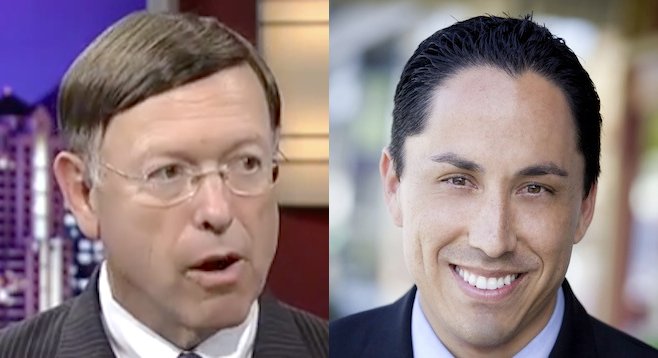 Final offer for Goldsmith and Gloria?

Cory Briggs, attorney for San Diegans for Open Government, sent the offer to city council and the city attorney on October 3. Tomorrow, October 21, councilmembers will meet behind closed doors to discuss whether or not to accept the offer and put a cap on increasing legal costs that taxpayers are having to spend in the two separate cases against Gloria and city attorney Jan Goldsmith.

It's not the first offer that has been sent.

The city attorney's office received similar demands in August of this year. The settlement included Gloria's case and the similar case against Goldsmith.

A month after submitting the offer, Briggs addressed councilmembers at a September 16 hearing during non-agenda public comment. The attorney suggested that Goldsmith was the reason the offer wasn't accepted.

"City attorney Jan Goldsmith has a conflict of interest a mile wide in defending the public records act case against him and yourself, Mr. Gloria. He is trying to protect himself from having to write a check to the taxpayers and the city when all of the dust settles. The conflict is so great it actually tainted the advice he gave to you, Mr. Gloria," Briggs said during public comment.

The offer, says Briggs, would have required Gloria to admit the response to the public records request was mishandled. The judge would then have decided the proper amount of attorney's fees and the case would have been over. Because the offer was rejected, litigation has continued and legal costs — including a $250,000 contract with outside counsel — have increased.

As reported by the Reader, Goldsmith appeared in court to defend his decision to not release the emails. While addressing the judge, the city attorney admitted to not only using private devices and accounts when communicating with the media and members of the public, but he also acknowledged that his office mishandled the request.

"For me, I don't care what the [Public Records Act] required in this lawsuit, your Honor," the city attorney told the judge. “I had a practice of sending [emails] to the city account, that's why it's in the city account. That would be a very good practice for anybody in public office to do that because I don't know whether someday the courts are going to find whether that stuff in your private accounts are yours or the city's or whatever, but if you have that practice, you don't worry about it…. There was a miscommunication and there shouldn't have been. We should have clarified that. And, frankly, on the part of the city, whoever the miscommunication was, I apologize. I don't think we should have had those miscommunications.”

Now, councilmembers, including council president Todd Gloria, will have a chance to end the litigation against Gloria and accept Briggs’s offer. If they do, and the terms are met, Goldsmith, using city resources, will be left to fight his battle alone.

Haven't these emails been disclosed yet? A settlement would be nice but where are the underlying emails? Where is the open government?

MichaelValentine~ Goldsmith and attorneys are compiling all of the emails as well as providing legal reasons for any redactions/exemptions. The judge ordered that to occur a few weeks back. As for the Gloria case, he has also been ordered to compile all texts/emails that fall under this category, however, the judge has not ruled on whether they are public or not. The current settlement offer would essentially end the lawsuit against Gloria. Goldsmith's case would continue regardless of outcome. Thanks. -dH

Should be interesting to see the extent of insider information kept from the public.

Good summary of the ongoing tawdry work of Goldsmith and Gloria. Can't wait to see the extent of redactions and the stupendously lame reasoning for them.

And, as everyone knows by now, Goldsmith has hired Gerry Braun as "communications" director. We can expect total transparency from now on, right?

Braun's salary will be only $113K, but the CA's office has a $46 mill annual budget, giving Braun much more opportunity to pilfer than he had with the measly millions that disappeared from Balboa Park Centennial funds.