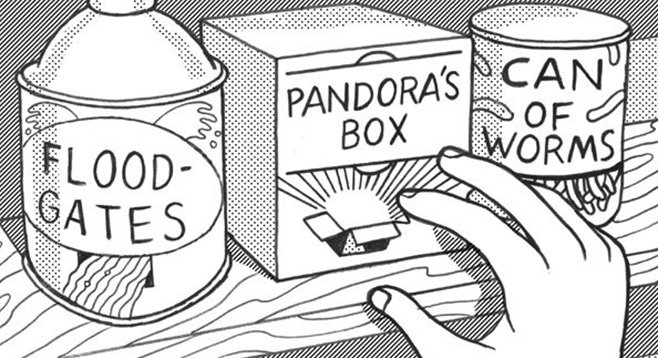 I thought I'd finish this thing up but failed.

I may have painted myself into a corner here with a couple of posts about the gym, pop music, ass and eyes. This is my attempt to make those previous posts make sense.

George Sandow has recently written about reaching a tipping point in classical music where the costs of not changing will outweigh the cost of changing. He mentions that the death of classical music has been going on for over 20 years... kind of like the War on Drugs, although I think that’s closer to 30 years now.

Let’s think of this as if we were Nietzsche proclaiming that God is dead. In order to do this we need to read a few sentences past this pronouncement in The Gay Science.

“God is dead. God remains dead. And we have killed him. How shall we comfort ourselves, the murderers of all murderers? What was holiest and mightiest of all that the world has yet owned has bled to death under our knives: who will wipe this blood off us? What water is there for us to clean ourselves? What festivals of atonement, what sacred games shall we have to invent? Is not the greatness of this deed too great for us? Must we ourselves not become gods simply to appear worthy of it?”

Now take that statement and replace “God” with “classical music.”

Classical music is not dying.

We are killing it.

We want to blame classical music institutions for the death of classical music. Perhaps they bear part of the blame but we have allowed our culture to play us to the lowest common denominator.

We have allowed pop music and 140 characters to become the definition of greatness —along with making a lot of money. I want to be very careful here. I refuse to condemn pop music or Twitter or capitalism. I like and enjoy all of them.

We have given up our control of what is great, of what is beautiful, of what is transcendent and allowed them to be replaced with what is most appealing, what is sexy, and what is successful.

This is what I was getting at with ass, "I’m so fancy," the gym, and whatnot. These are the lowest common denominator.

Even in writing this, I’m about to wrap it up because it’s getting too long for online reading, which means I’m allowing myself to be controlled by what is most appealing and what will be successful.

Success is not greatness. Sexy is part of beauty but not its essence. Think about the people we consider successful. Are they also great?

Think about the music that is considered successful. Is it also great? Is it transcendent — meaning “beyond or above the range of normal or merely physical human experience”?

Success has nothing to do with greatness. In fact, greatness often inhibits success. Success is about getting a dollar from 100 million people every month. Greatness costs more than that.

We need success to grow into greatness in order for classical music to thrive. Right now success appears to be trying to figure out how to get two dollars a month from 100 million people.

Fortunately, in San Diego, we have had success and greatness. I’m thinking here about the Jacobs family.

I think I’ve failed in wrapping this up. In fact, I may have opened an even bigger can of worms... can of worms. Was there ever such a thing as a can of worms?