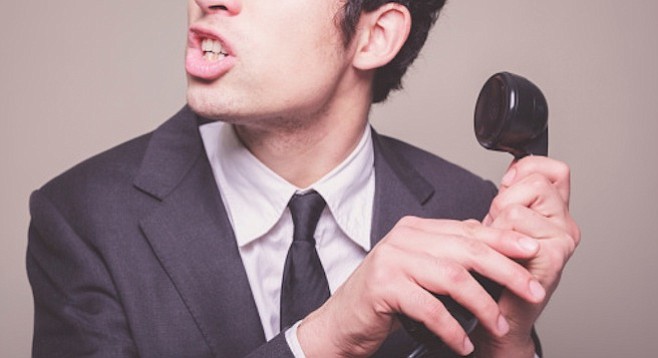 There is no “Lieutenant Woods of the Oceanside Police Department.”

On November 11, the Oceanside Police Department received 18 calls throughout the day seeking clarification about failing to appear and pay the fines for red-light camera infractions; 15 callers were residents of Oceanside and 3 were from outside the area, one as far away as New Mexico.

The 18 callers said they received a call from a “Lieutenant Woods of the Oceanside Police Department.” “Lt. Woods” advised the person that the escalating fines had to be paid immediately to avoid arrest.

Problem is, there is no one named Lt. Woods with the department. And police departments do not adjudicate a moving violation; that’s the court’s responsibility.

Cosby said this is a new twist on an old scam — people calling as a police agency, soliciting cash donations for a policemen’s’ benevolent association, athletic league, or wounded officer organization.

Cosby says had these almost-victims taken the bait, the scammers would probably have had them mail the cards to the “Oceanside Police Dept.” in care of a fake address or personal postal mailbox.

Because no one took the bait, the police department has no idea what address the potential victims would have been told to send the cards to.

Oceanside police have not received any reports of someone being taken by the scam, but would request anyone that received such a call to please contact the department at 760-435-4900.

How can OPD be so sure that "no one took the bait?" If someone did that, it's very unlikely that he/she would have called them afterward. I'd guess that a few did take the bait, and sent the funds off. But only when one reports falling for it will they know anything more, and by that time, it will be too late to catch the bad guy.

But there's another question here. Were these folks all ones who already had a citation for a red light camera violation? If so, this has the signs of an inside job at either the OPD or the company that runs the cameras.

None of them had red light violations, thus playing on the fear of something they knew nothing about.

There was a Lt. Wood at ECPD now retired. Maybe it was him LOL