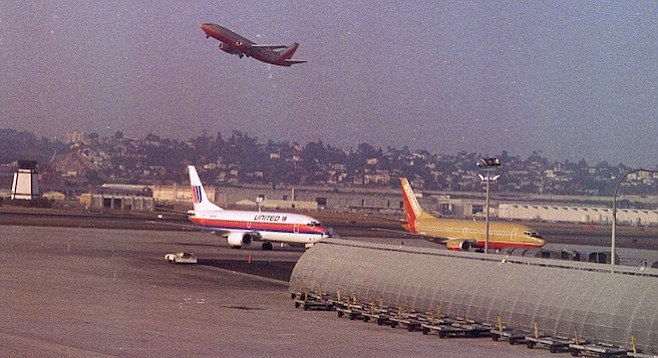 Yahoo.com lists seven of the nation's "most terrifying" airports. San Diego International (aka Lindbergh Field) is on the list.

"Prepare to kiss the ground upon landing," says Yahoo, noting it's "considered one of the scariest" airports, pointing to "mountains on the north and east," Mexico to the south, and "pretty intense tailwinds" to the west. The airport is downtown, "convenient to getting to your hotel" but making "for a white-knuckle descent."

Yahoo.com lists seven of the nation's "most terrifying" airports. San Diego International (aka Lindbergh Field) is on the list.

"Prepare to kiss the ground upon landing," says Yahoo, noting it's "considered one of the scariest" airports, pointing to "mountains on the north and east," Mexico to the south, and "pretty intense tailwinds" to the west. The airport is downtown, "convenient to getting to your hotel" but making "for a white-knuckle descent."

People today are apparently much easier to scare than they used to be.

The most entertaining landing I ever witnessed flying into San Diego was on an American Eagle commuter flight, well before 9/11. The flight attendant got on the intercom as we were approaching Lindbergh Field, and announced in a chipper voice, "The co-pilot will be landing the plane today. He has never had a successful solo landing before, so if we make it please be sure to give him a nice round of applause." Everyone on the plane burst out laughing, and the landing was perfect.

badcyclist: I would have immediately thought, "if he has never had a successful landing before, please tell me about his unsuccessful ones." Best, Don Bauder

Better build a new airport in the middle of the desert so we can develop the Imperial Valley and leave prime SD Harbor land for Papa Doug to develop.

ImJustABill: Don't say it too loud. It could happen. Best, Don Bauder

Mountains to the North and East? Sure--many miles away. Mexico to the South? Sure--about 8-10 miles. Pretty intense tailwinds to the West? Sure--but don't planes usually land into the wind? I always thought the main problems were the building and hills just to the east of the runway, making the first part of the runway useless for landings in the usual east to west direction.

aardvark: Yahoo notes that the airport is close to downtown, causing the white knuckles upon landing. I think that covers your point, which is a good one. Best, Don Bauder

"Pretty intense tailwinds to the West?"

Actually no - the average wind speed in San Diego is 7 mph, compared with 10.6 in San Francisco and Kansas City, 12.2 in Oklahoma City, 12.3 in Boston. In fact, of the 50 largest US cities, only Phoenix has a lower average windspeed than San Diego. ( http://www.currentresults.com/Weather/US/wind-speed-city-annual.php )

It's on the internet, it must be true.

Psycholizard: You can argue with some of the details, but you can't argue with the main thrust: the San Diego airport is one of the scariest in the nation. Best, Don Bauder

I worry more in bad weather, and on Harbor Drive.

Psycholizard: How much bad weather does San Diego get? C'mon. Best, Don Bauder

In this case, the airport is sort of saucer-y and sometimes requires flights to "go around" again, but San Diego has the most benign and predictably calm weather of any city in the United States, so descending flyers should enjoy looking into the windows of Mr. A's on the way to landing at Lindbergh.

monaghan: Then when they arrive, they should look into the history of the owner of the original Mr. A's, the late John Alessio, and his sidekick, the late C. Arnholt Smith. Both spent time in custody and both were named Mr. San Diego. That tells one a lot about San Diego. Best, Don Bauder

As usual it's about the real estate. No one will say what they intend for the Airport land if their scheme succeeds, same as for the Mission Valley land, in the Crack Central Constadium proposal.

Psycholizard: Much -- too much -- of the history of San Diego is tied up in real estate. Just above, I mention two convicted scoundrels who had been named Mr. San Diego, John Alessio and C. Arnholt Smith. Real estate was their game -- among other games such as horse racing. Best, Don Bauder

SAN's great safety record may be largely due to the high pucker-factor. Keeps the pilots on their toes--no stews in their laps.

Do y'all bee-lieve everything every yahoo says?