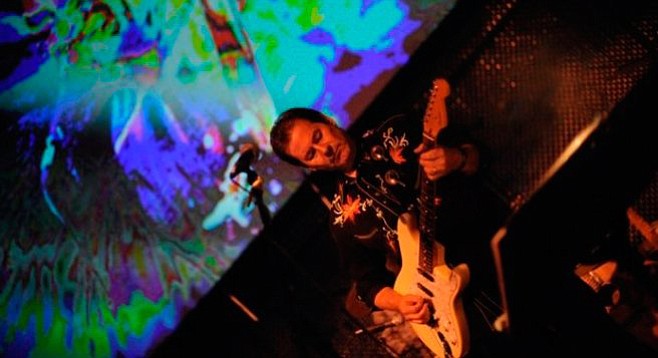 “Paula and I love what we do, so it’s been very easy for us to spend much of our time at the studio without feeling overwhelmed or consumed by the business,” says guitarist Marc Intravaia, who teaches music at the Sanctuary Art and Music Studio, cofounded with his wife in 2009. “The funny thing is that we love the studio so much that we usually find ourselves back there on our days off, painting and playing music.”

The Kearny High grad first hit the local scene with his late-’60s band Marshmallow Highway. The next decade found him manning guitar for Blue Jeans of Heredity, which evolved into Head County, while his later group Listen ended up on the local KGB Homegrown album series. He’s been with the Eve Selis Band for 23 years.

Geared toward young people and conceived as “a place for people to relax and create in an inspiring and peaceful environment,” the Sanctuary offers a fully stocked art studio as well as guitar, piano, and vocal lessons. “We financed it ourselves when we started in Del Mar with a home-based business and one small studio on the property. We hosted live music, art camps for kids, and private music lessons, and we got so busy that Del Mar kicked us out...it was a very rural setting with lots of trees and horses grazing on the hillside above our home, but we couldn’t stay in the neighborhood with so many people coming by.”

The studio moved to a 2400-square-foot commercial space in Sorrento Valley this past April. “We signed a three-year lease. Because we’re in an industrial building, we made sure that our studio is unique and colorful, with lots of open space to paint, draw, sculpt, or whatever medium people choose to work in. We even have a splatter shack so that folks can channel their inner Jackson Pollock.”

Back to the Garden Band: Woodstock

Unlike in Del Mar, live band performances are infrequent. “We’re not a music venue nor licensed to be one. I’ve been performing live shows since 1973 and have played just about every kind of venue you can imagine, and have absolutely no desire to run a music venue.”

Intravaia’s band Back to the Garden will share a bill with Sanctuary music consultants-for-hire Eve Selis and Mattie Mills for the Woodstock Tribute Show at Poway Center for the Performing Arts on November 22.