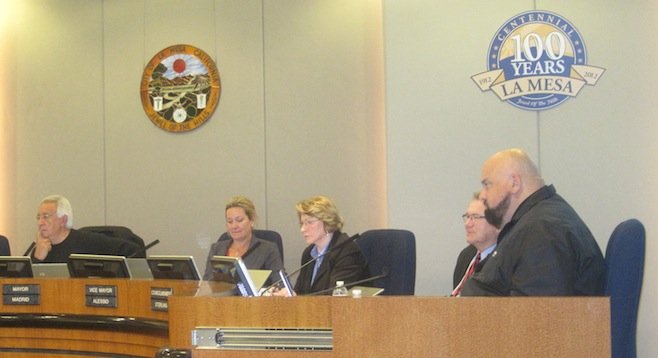 The La Mesa City Council on March 25 rejected Mayor Art Madrid's request to modify the city's smoking ordinance to ban electronic cigarettes in parks and other locations where smoking is prohibited. Madrid joined in the unanimous vote that directed city staff to return within 90 days with information about issues such as e-cigarette legislation in other jurisdictions.

Only the mayor commented on Councilman Ernest Ewin's e-cigarette agenda item that stated the city's "approach should be similar to the social-host ordinance." Ewin said he was "looking for uniformity," especially among jurisdictions sharing boundaries with La Mesa.

Madrid said that although the goal was "laudable, each jurisdiction has its own personality" and "I'm going to be worrying about the things that take place in La Mesa."

The mayor called for action, saying a resident at an earlier meeting described dining with his family at a restaurant where a patron used an e-cigarette.

Madrid's request attracted fewer people than the proposal he placed on the January 28 agenda. He initially called for a citywide ban on e-cigarettes sales. While some residents endorsed the ban, many speakers said using e-cigarettes helped them quit smoking. Madrid modified his proposal to include e-cigarettes in the smoking ordinance. However, the council voted to delay action until city staff researched the issue. Councilwoman Ruth Sterling cast the only vote against revisiting the issue.

At the March meeting, she referred to statements by people who advocated e-cigarette use to quit smoking. "We heard a lot of testimony," Sterling said. "I don't like to take away something that is working."

Madrid replied, "Commendable, but not at the expense of the public."

Sterling later said "let" restaurant owners decide whether to set up a section for e-cigarettes. "Why does government have to do it?"

The council heard testimony from three residents, Debbie Kelley of the American Lung Association, and Lorenzo Higley of Communities Against Substance Abuse.

Kelley said 12 of the 18 cities in San Diego county were looking into regulating e-cigarettes, and 11 communities were considering prohibiting e-cigarettes where smoking was banned.

Highley said state and federal governments appeared to be moving towards regulation, but research "takes time…. I don't want to be part of that research" and learn about harmful effects in 20 years.

Residents Evelyn Hogan and Nancy Goettler supported e-cigarette restrictions. Hogan said that not much was known about the products and that the harmful effects of cigarettes weren't initially known. Hogan said a doctor prescribed cigarettes to her mother to "help with her eight children. I don't think it did [help; but] she couldn't catch us."

Bill Jaynes thanked Sterling "for leading the Libertarian renaissance in La Mesa." He spoke against a "paternalistic approach" and said that those concerned about vapors should know that eggplant and sundried tomatoes contain nicotine.

Madrid said, "This is not a nanny state. Residents bring these concerns to us."

Councilman Mark Arapostathis said the council needed to be informed about issues like existing state and federal legislation.

Why not just quit smoking completely and forget about these idiotic e-cigarettes. That's like trying to break a speeding habit by purchasing a motor scooter or a bicycle.

it's called harm reduction, nicotine without the combustion that causes the brunt of the harm. Feel free to dislike them or use them, but please don't chastise those that do. Do you also wish for Cars to be banned because they can crash? No...we introduced seatbelts and speed limits as a way of reducing harm.

So samuelmunro, are you telling us that doing 90 in a 65 is OK because there are posted speed limit signs and seat belts are mandatory?