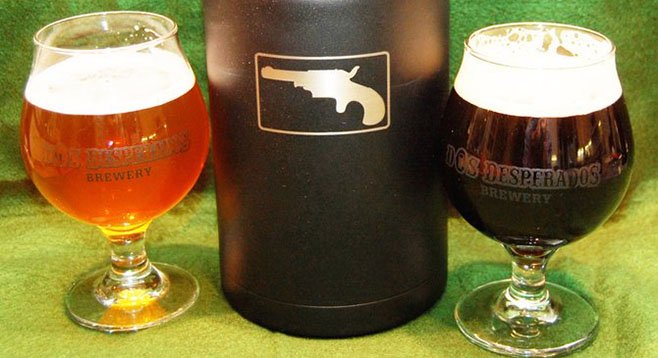 These desperados have been tough to track down. Rather than drum up pre-open hype, Steve and Dora Munson have channeled their husband-and-wife energies into quietly establishing their plot a block north of San Marcos’ Restaurant Row. With the exception of an early article from yours truly in which they shared conceptual info for their post-retirement project, Dos Desperados Brewery (1241 Linda Vista Drive, San Marcos), their communications with the rest of San Diego’s craft beer frontierspeople have been limited to smoke signal-like one- and two-line messages on their business’ Facebook page.

A week into Dos Desperados’ existence, high off the positive vibes from a successful opening weekend, it would seem their approach was a good one. Social media is abuzz with pleased comments from those who came in for an early taste of what is one of the most wide-ranging assortments of beer styles, as far as cultural derivation goes, that I’ve seen from an opening day roster in some time.

Though Steve had originally said he’d mostly brew Belgian beers, only his Fugitive Farmhouse Ale hails from the land of chocolate, diamonds, and French fries. The rest of his beers trace back to the United Kingdom — Mamacita’s Crème Ale, Vanilla Oatmeal Stout, Two-Timer Scottish Ale, and Che Che’s IPA. Though a product of Britain, that last one is an India pale ale brewed in the hoppy, West Coast style. All of the beers come in at under 6% alcohol-by-volume.

Consistent with the names of the beers is the tasting room and merchandise’s adherence to an early American western theme. Wild West artillery is featured as part of the interior design and the silhouette of a six-shooter is emblazoned on Dos Desperados’ growlers, which come in the form of highly effective, stainless-steel, temperature-maintaining Hydro Flask containers. It’s a concept more complete than many new operations. Dos Desperados Brewery is open Wednesday through Sunday.