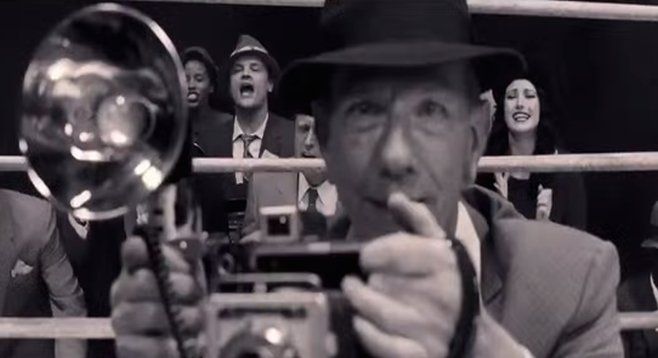 Coming soon to a Red Box near you: The blah Bull! The redundant Bull! Martin Guigui’s The Bronx Bull!

From the looks of the trailer, the only thing this has in common with Raging Bull are a few purloined flashbulbs and a director who shares his first name with Him.

A casting call was put out in April, 2012 under the film’s original working title, Raging Bull II. At the time, everyone thought MGM, producers of Martin Scorsese’s pantheonic 1980 masterpiece, would swat the pesky sequel before it had the chance to turn into a full-grown mosquito.

As reported in this space two months later, “the studio claims the boxer was contractually obligated to offer them first look at his follow-up book, Raging Bull II (1986). LaMotta — whom Scorsese (and screenwriter Paul Schrader) clearly depicted as a man with a head made of rock — had no right to take his business elsewhere without first offering the film rights to MGM. In its complaint, MGM accused Raging Bull II producers of ‘publicly associating’ their sequel with Marty’s original stating, it was “plainly intended to create confusion in the marketplace and to trade off the value.”

MGM asked that the court call the fight in the first round by putting a halt to production.

The studio won, but eventually dismissed the lawsuit. MGM and Sunset Pictures released the following joint statement in August, 2012: “The parties have amicably reached a resolution of their pending litigation, pursuant to which production of a film based upon certain events in the life of Jake LaMotta will proceed under the working title The Bronx Bull. That film is not related in any way to the 1980 motion picture entitled Raging Bull, and MGM is not associated with the film in any respect. Neither party will have any further statements regarding this matter.”

Described as “a combination ‘before the rage’ and ‘after the rage’ (and with a lot of Raging), the film is now completed and rarin’ to entertain! Several made men (and one woman) signed on to help smear a patina of legitimacy: Goodfellas alumni Paul Sorvino, playing Jake’s brutish old man, joins Mike Starr, also from Goodfellas, and Bringing Out the Dead’s Tom Sizemore.

Was Jake LaMotta’s follow-up autobiography Raging Bull II a work of fiction or did the filmmakers chose to jettison or rename a few of the major players in an effort to avoid further litigation? No Vickie, no Joey, no Salvi, no Tommy Como? Why not have Jake go a few rounds with Mike Tyson while you’re at it? Hey, Guigui, you’re killin’ yourself the way you cheat.

No release date has been announced. Unless the Digital Gym steps up, it’s doubtful we’re likely to see it outside of our homes. It’s only a matter of time before it catches up with me. Hell, there’s a good chance that a $3 BigLots Blu-ray will find a slot in my closet. Still, taking a dump on this holiest of altars is more unwholesome than all of Scorsese’s on-screen venality combined, including the jar of ears. As cut-rate as this looks, it would have been a lot cheaper to simply colorize the original.

Might as well have given the lead to John Travolta.

You're a funny man Scooter.

They should ask DeNiro to be in it. I'm sure he'd do it. He does anything now.

Ya' know, he probably would if there was enough money in it.

You mean he wouldn't throw himself in? Was he asked or did he forsee the disaster?

I worked 5 weeks on the original (during the boxing scenes shot in the old Culver Studios in Culver City), but they didn't ask me back for this one. :-( OK, it was only as an extra; for $40 a day. And it was mostly long and boring days. The food wasn't bad, though.

You should have paid Him $40 for the privilege. :)

The lowly extras (referred to as "background") were never paid any attention by DeNiro or Scorsese. We got our instructions usually from the 2nd A.D. And the craft services guy made a LOT more money than we did.

Don't ever make eye contact with either of them. Remember what fate befell Lot's wife.

Except with those two, your fate would be swimming with the fishes! ;-)