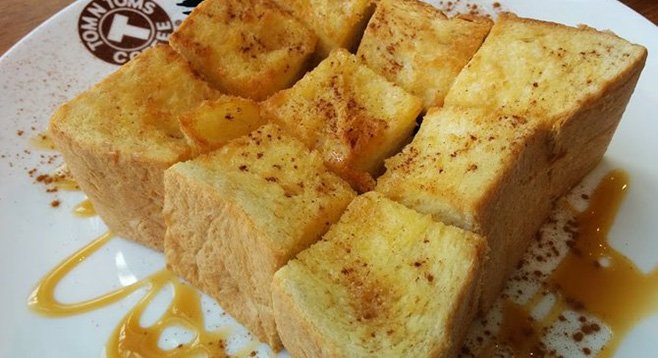 Tom n Tom’s Coffee enjoys minor popularity in LA, where Korean communities opened the door to the originally Korean-owned chain of coffee shops. Now, it’s open in San Diego, in the East Village and at the edge of Cortez Hill. The style is a kind of anime Starbucks, or perhaps a K-Pop Coffee Bean and Tea Leaf is more accurate. It looks exciting on paper and in press releases, but the actual effect is pretty “meh.”

Their big thing is “butter bread,” which amounts to an enormous piece of toast, buttered and topped with sweet or savory additions. Cinnamon toast has caramel sauce, cinnamon sugar, and whipped cream. Garlic toast has garlic butter and cheddar cheese. 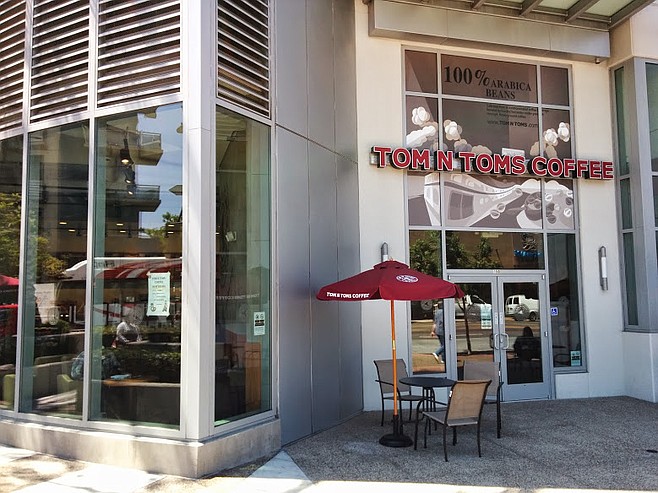 It’s a cute idea, but unfortunately not worth $5.50 for empty calories. Some of the specialty pretzels — filled with corn, shrimp, or pepperoni — might stick to your ribs a bit better. Even then, the pretzel material is second rate. Dipping it in some cheese sauce helps.

The coolest things at Tom n Toms are some of the more “out there” drinks. Black sesame coffee smoothie is a wonderful idea. Yuzu iced tea is a winner, too. They do milk tea and other boba drinks, which are always fun. Blue lemonade is weird, but still a cool idea.

Also, the internet is blazing fast, and not seemingly routed through a data-mining gateway!

Some of the menu items listed on the menu board aren’t even available at the East Village Tom n Toms, which seems sloppy. There’s even a smattering of comical English on the menu, which raises eyebrows, considering this chain is already well established in the US. The higher-ups are either incredibly sloppy, or deliberately creating a kind of cutesy “Engrish” theme, which strikes me as at least self-deprecating, perhaps mildly racist, and not doing anybody’s culture any big favors in the long run.

All of that would be excusable, provided the mythical butter toast was worth cooing over, but there’s just no reason to get misty eyed over the appearance of Tom n Toms in town, which is really too bad. We already have Cafe Hue.