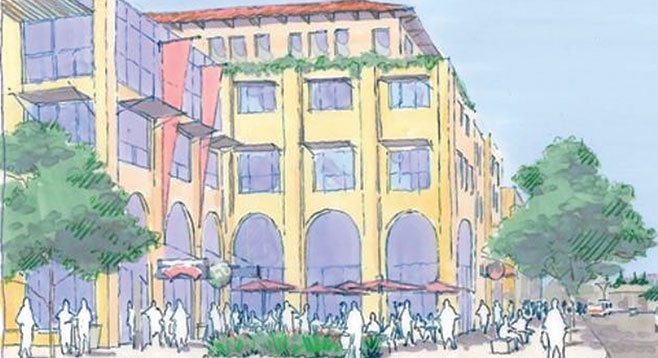 Trustees of the California State University system advanced a plan to spend $142.7 million to build Plaza Linda Verde at San Diego State. The so-called mixed-use facility, in the works since 2011, “will house 659 beds of student housing, 35,000 gross square feet of retail space, and a 392-car parking structure,” according to an agenda item from the trustees’ May 21 meeting.

“The project will be located at the southern border of the campus along the west side of College Avenue between Hardy Avenue and Montezuma Road in an area that is currently occupied by temporary trailers and vacated apartments,” according to the item. “The residence hall buildings will have a cement plaster exterior finish with accent features such as balconies and awnings. The parking garage will be a separate seven-story concrete structure designed to minimize the view of the parked vehicles and compliment [sic] the adjacent housing complex.”

The development has grown of late, according to the documents. “The university completed an Addendum to the Final [Environmental Impact Report] in March 2014 for the San Diego State University, Plaza Linda Verde project. These revisions primarily include: 1) an increase from five stories to six stories of student housing accommodations for two of the six student housing buildings previously approved, and 2) an increase from four above-ground stories (with a subterranean story) consisting of 342 parking spaces to seven above-ground stories of parking facilities for 50 additional spaces.”