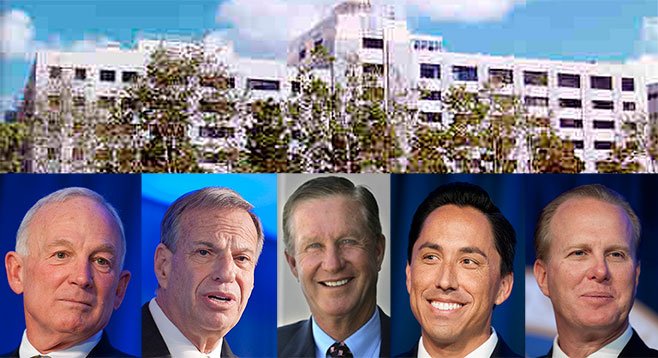 To lobby is divine

The tortured saga of the City of San Diego’s high-priced Washington lobbyist entered yet another round of possible contention with a request last week by GOP mayor Kevin Faulconer for proposals from a fresh round of would-be influence-peddlers. The controversy began in January of last year when newly elected mayor Bob Filner fired the tony DC firm of Patton Boggs, which had been retained by previous GOP mayor Jerry Sanders. Records showed that the lobbying company had been working on the so-called Navy Broadway Complex, a “public-private” partnership undertaken by La Jolla developer and key Filner foe Doug Manchester. Without mentioning the Patton Boggs link to his project, Manchester’s newspaper U-T San Diego opened fire on the Democratic mayor, asserting in both its news and editorial columns that Filner’s move would “leave the city without an important voice in both capitals right when the first round of budgets and legislative priorities are being crafted.”

After Filner resigned following a sexual harassment scandal last summer, his temporary successor, Democratic city councilman Todd Gloria, hired back both Patton Boggs and Sloat Higgins Jensen & Associates, the city’s Sacramento lobbyist, which had also been let go by Filner. When Sloat got caught up in an influence-peddling scandal of its own and was forced to pay a record $133,500 fine earlier this year, Faulconer put out a request for seekers of that job, followed by the current solicitation for the Washington contract, responses to which are due by June 11.

Will the new lobbyist lean Republican or Democratic? Past experience with Sanders shows that Manchester and other members of the GOP have weighed in heavily for their favorite partisans. The document reveals a concern by the mayor about other clients that potential lobbyists will be working for, requiring “written notice of such proposed employment, for the purpose of determining potential conflicts of interests.” The confidential disclosures could also provide the mayor and his nosy financial backers with a trove of political intelligence. Says the solicitation: “All information received by the Office of the Mayor shall be treated in confidence, as the Contractors’ trade secret, and shall be returned to the Contractors upon making a determination as to the presence or absence of a conflict.” No mention is made of how much the mayor is willing to pay.