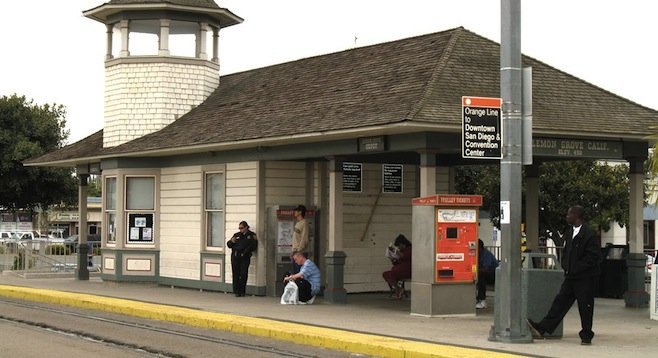 According to Lt. Chris May, the sweep, dubbed "Operation Lemon Drop," was a means of contacting prolific offenders. Using trolley-fare enforcement as a reason to approach passengers, those failing to pay were detained while their names were run to check for arrest warrants, connections to crime investigations, or probation violations.

The arrests were made between 2 p.m. and 9 p.m., with another 119 citations issued for trolley-fare violations. Per Lt. May, a majority of the arrestees were classified as "realigned offenders," mostly non-violent criminals whose supervision responsibilities have been transferred from the state to the local level as a result of a court-ordered population reduction in California's overcrowded prison system.

Why sharks have moved to San Diego

Avoid murky water, travel in groups, aim your board at aggressor

Curated stories, fun places to hang out and top events. Don’t miss out.
Most emailed stories
- min read
Where the Faulconer governor money is coming from
- min read
Oceanside grandma comes home from San Felipe, gets beat up and tortured
- min read
Columbine and Pepper streets get serious patch

According to Lt. Chris May, the sweep, dubbed "Operation Lemon Drop," was a means of contacting prolific offenders. Using trolley-fare enforcement as a reason to approach passengers, those failing to pay were detained while their names were run to check for arrest warrants, connections to crime investigations, or probation violations.

The arrests were made between 2 p.m. and 9 p.m., with another 119 citations issued for trolley-fare violations. Per Lt. May, a majority of the arrestees were classified as "realigned offenders," mostly non-violent criminals whose supervision responsibilities have been transferred from the state to the local level as a result of a court-ordered population reduction in California's overcrowded prison system.

Since the public events like weddings are forbidden, we’d struggle a lot

One might also wonder how many of those arrested had warrants out due to their failure to appear or pay the fine for an earlier citation for riding without a ticket. For a long time, I've wondered just how effective the fare enforcement on the Trolley actually was. But you know, if you were a parolee or "realigned", it seems to me you would walk the straight-and-narrow, and not board a trolley without a ticket. That would be risky, that is, if anybody really cared or checked you out. So, that's what made this operation different than the usual fare checking. Gotcha!

That's one way to look at it. Another might be to consider that as a parolee, a job might not be so easy to find, with the record and all...Yea, I know, they should have thought about that in the first place and blah, blah, blah..regardless-- $2.50 fare might actually be a pretty big chunk of one's cash for the day.

Fact is, the trolley fare is too high, for parolees and everyone else. What I'd like to know is how the hell are these people ever going to get back on the straight and narrow if we keep busting them for petty crap like riding the trolley for free? Is the name of the game to see to it that the only thing that will actually work for them is to do something criminal again? Because I don't see anyone doing anything to make it easy for them to go straight.

I like to see that there are compassionate people out here. Yes, I trust that to be the case if someone has to eat or spend money on a trolley they might consider their chances of getting caught and ride without ticket. Maybe one thing could be that if they are on public assistance or getting help to reintegrate and getting jobs that the city will give them a pass, at least until they found work, or give a discounted rate. The trolley fare is actually not high in my opinion. I lived in Europe for many years and in comparison the fare is fair, but low income should get help with it. I can see transportation being a vital issue to finding work, it is hard as it is here in San Diego to get around on public transport only...

Hey... a car is going to be "too much" for someone who can't afford $2, too. Does that mean they get a pass for stealing a car?

How exactly can they be expected to "return to the straight and narrow" if we let them slide for intentionally violating the law? Regardless of how minor the crime may be, it shows a lack of willingness to change in previously convicted criminals. They should be returned to Thunderdome.

The other day I had a conversation and one person said that in San Diego you'll have to have money to live. I asked so how do the many folks who just make minimum wage get by and the person answered that they turn to crime... It somehow makes sense for a person to get on a trolley without a pass if they are in need to go to a job interview, job or meeting with their social worker or whatever... My parents were part of the world war two generation growing up in Europe and I recall often how my mother told me of her night time excursions to roam the fields of farms nearby to steal potatoes. I am not condoning theft but I do understand that people do things as they see it for survival. Some more some less. The potato example may not be good here, given my parents were "guilty" of agreeing with a dictator, but many did repent after and tried their entire life to change the wrong... I want to think that many criminals are the same.

If someone can't afford to live in San Diego, they should move. Not start stealing. Comparing them to people who steal potatoes to avoid starving to death is ludicrous. San Diego is an extremely expensive place. Move to Oklahoma or something... mush lower cost of living, same minimum wage. I know... "That isn't fair, I have a human right to live near the beach!"

Couldn't we just blame all this on Governor Jerry Brown who "realigned" our prison populations, transferring hardened criminals from heavy-duty State prison facilities into our down-home County Sheriff-run detention operations -- as well as onto our red trolley system?

A few years ago one of these guys, an imprisoned gangbanger defendant, smuggled a razor in his mouth into the courtroom and slashed the face of his own public defender attorney in a slick attempt to get a mistrial. The gambit failed, the trial moved to conclusion, defense counsel rallied, the prosecution triumphed and the gangbanger got a longer sentence for having tried to murder a fellow prison inmate.

Obviously, people should pay the required fare on public transportation, no exceptions, no excuses.