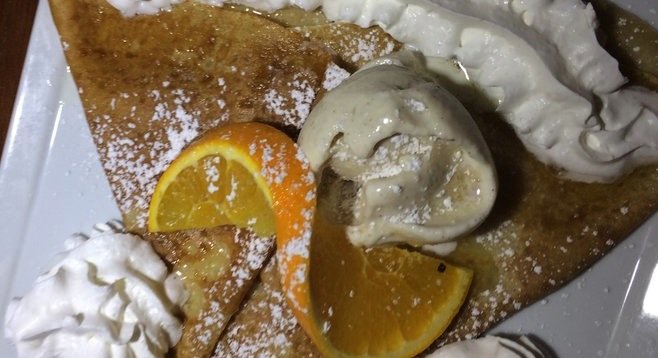 As happens with so many restaurants, Bino’s Bistro fell victim to protracted delays as the Hillcrest crêperie sought a beer and wine license. Kudos to the restaurant for soldiering through a drawn-out permitting process (which can be death for an aspiring business), getting a license, filling up a respectable wine list, and expanding into dinner service.

The wine list may be Bino’s best development. Their website shows 300% markups on cheap plonk as part of the dinner menu, making no mention of the separate wine list with more reasonable (50-100% markup) deals on better wines. Rest assured, there are much better options than paying $28 for a bottle of Ravenswood! 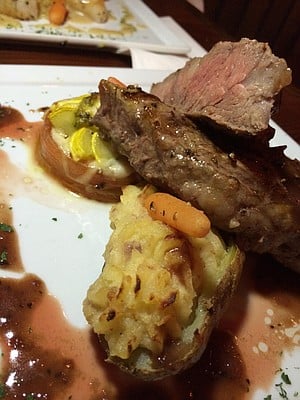 With the wine came more substantial plates. The mostly French-ish bistro fare makes use of stylistic touches to buy itself a bit of distinction as not just another series of mediocre steak/chicken/salmon dishes.

Consider the burnerwurstel, a simple dish of sausages stuffed with cheese, wrapped in bacon, and served with french fries. It sounds like something invented for der Wienerschnitzel, but it’s actually good old-fashioned Austrian pub fare. Bino’s does a good job with it, though being able to get a Saint Archer kölsch doesn’t hurt!

The restaurant shows its shortcomings as the plates get “fancier” than the humble sausage dish. The kitchen attempts rich, luxurious dishes, but the effect comes across somewhat ham-fisted. Confused duchess potatoes and a too-salty pepper sauce do a disservice to the $24 New York steak, which was otherwise cooked well enough, though in need of trimming.

So it goes, also, for seared sea scallops and caviar. “Too much!” scream the tastebuds as clam beurre blanc and (of all things) cheese mount an all-out tactical assault on behalf of the already rich scallops, which are not always of the finest quality. 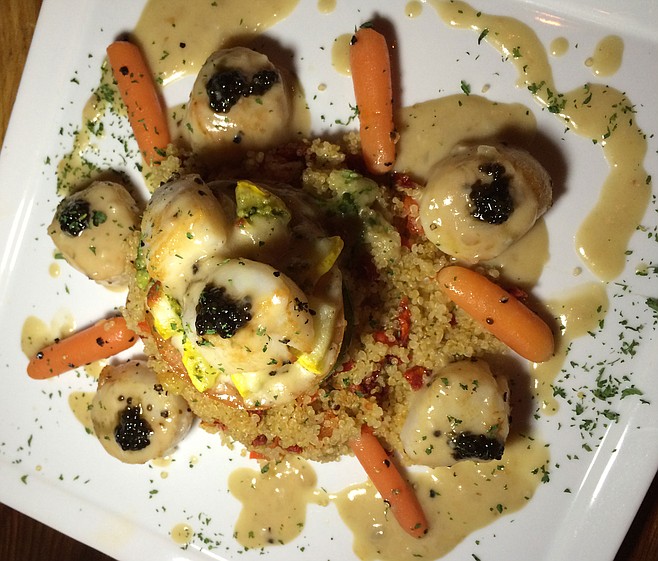 Curiously, the kale salad served with any given entree is quite delicious.

‘Tis better, in the long run, to stick with the crêpes at Bino’s, which have not changed a bit. The crêpe Suzette, or the Limoncello crêpe, is a fine way to close a meal, though the restau still insists on piling on the Redi-Whip. Ask them to leave it off. Better yet, maybe they could start using the real thing! It's too bad that the Suzette doesn't come across as the real deal, with a refined caramel sweetness and boozy undertones, but it's still better than yet-another-bread-pudding.

As things are now, an assortment of crêpes, both sweet and savory, and a bottle of wine would be the best meal at Bino’s, with the possible exception of beers and burnerwurstel first!