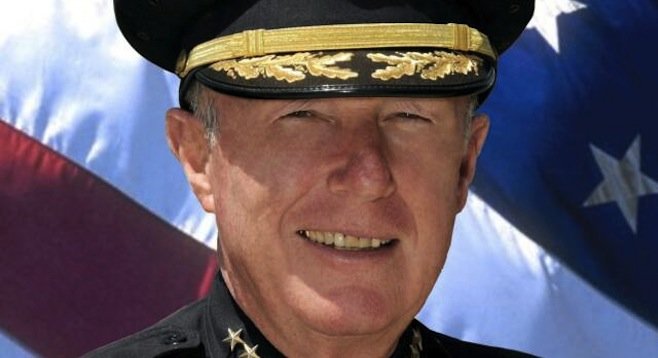 Together, they funneled more than $500,000 of illegal foreign money into San Diego municipal and federal campaigns, primarily in 2012 and 2013, according to the charges.

Singh heads a company named ElectionMall, Inc., and Encinas was owner of a private security firm. According to the complaint, Encinas wanted the next mayor to fire police chief William Lansdowne and replace him with a person of Encinas's choosing.

Among the campaigns in which illegal foreign money was funneled were the 2012 San Diego mayoral campaign, a 2012 congressional campaign, and the 2013 special mayoral election.

Under United States law, foreign nationals are prohibited from making contributions in American elections. According to the complaint, Encinas helped disguise the contributions through use of shell companies. The unidentified donor is a resident of Mexico. A so-called "straw donor," owner of a California company and a friend of the foreign national, assisted in the illegal donations.

Mike Lipman, attorney for Singh, said his client "denies any involvement or improper or illegal activity and intends to vigorously defend himself against the unfounded charges."

Tiki Oasis, Miss You Like Hell, Sip of Julian

Together, they funneled more than $500,000 of illegal foreign money into San Diego municipal and federal campaigns, primarily in 2012 and 2013, according to the charges.

Singh heads a company named ElectionMall, Inc., and Encinas was owner of a private security firm. According to the complaint, Encinas wanted the next mayor to fire police chief William Lansdowne and replace him with a person of Encinas's choosing.

Among the campaigns in which illegal foreign money was funneled were the 2012 San Diego mayoral campaign, a 2012 congressional campaign, and the 2013 special mayoral election.

Under United States law, foreign nationals are prohibited from making contributions in American elections. According to the complaint, Encinas helped disguise the contributions through use of shell companies. The unidentified donor is a resident of Mexico. A so-called "straw donor," owner of a California company and a friend of the foreign national, assisted in the illegal donations.

Mike Lipman, attorney for Singh, said his client "denies any involvement or improper or illegal activity and intends to vigorously defend himself against the unfounded charges."

An ocean of Konnichiwa Sushi

Slammed down by the bullring

Dragged down to the bottom

The dough was probably laundered through the Lincoln Club before it wound up in the hands of the candidates. This may only be the tip of the iceberg and there could be many more indictments to follow, including campaign staff and the candidates themselves.

Burwell: Correct. It could be very big, and not just in San Diego. Foreign money DOES pour into U.S. elections. I suspect it goes the other way, too: big U.S. money goes into foreign elections. In a world economy, money -- particularly dirty money -- is fungible. Best, Don Bauder

All I can say is, you don't have to be a criminal to want to replace Police Chief Bill Lansdowne whose rogue cops like Officer Anthony Arevalos are costing us public confidence in the police force and a bunch of money in lawsuits.

The complaint unsealed yesterday charges that Cortes conspired with Ravneet Singh and Ernesto Encinas to funnel more than half a million dollars of foreign money into San Diego municipal and federal campaigns. Cortes allegedly approached an individual running for federal office in 2012, and was told that the foreign national would have to show proof of a green card. Cortes and a coconspirator helped the foreign national contribute in a straw donor's name. Best, Don Bauder

Cortes and Encinas went to Marti Emerald with their issue:

Beside the point, I know: It's pretty cool that Emerald's calendar entries include diacritical marks!

HonestGovernment: Apparently they were discussing police issues. Or did they talk about something else? Best, Don Bauder

A little off topic, but those pictures of cops, and especially chiefs of police, in full uniform, wearing military gear and four stars like a full general of the army, air force, or marines are so overwrought. The hat he's wearing has the scrambled eggs of an army field grade or general officer, and oddly enough are being phased out by that service. While I suppose there's a need for some sort of formal uniform for the cops, making it look like those of our department of defense is just over the top. How about something based on a business suit?

Visduh: Or, in many cases, how about a yellow jump suit? That's what some of them deserve. Lansdowne is really not a major part of this story. That will become obvious as it unfolds. Watch Matt Potter's stories on this. He has dug up significant parts of this story in the past, and those items will no doubt be repeated. Best, Don Bauder

City Attorney Jan Goldsmith forbade Chief Landsdowne from carrying a swagger stick, or wearing his pearl handled revolver. Goldsmith feared the Chief would lose control of his Irish temper and whip somebody with the swagger stick, causing legal woe for the city. Chief Landsdowne also attempted to issue an order forcing all officers to wear Sam Browne belts. The order was rescinded because many officers were just too damn fat to wear the belts.

Burwell: Oh, those swagger sticks. How I hated them when I was in the Army. Best, Don Bauder

Burwell, up to now you've been a most factual reporter. Now you are going for satire, and while there's nothing wrong with that, may weaken your credibility. (Swagger stick? "Pearl handled" revolver? Remember that Patton had ivory grips on his six-shooters, not mother-of-pearl. And those borrowed-from-the-British Sam Browne belts went out in early WWII, never to return. You know your military history, sort of.) Woe for the city is what all of this is all about.

There was a good analysis in SDFP. It appears that Encinas wanted someone in the Police Chief's chair that would be friendlier to the interests of his clients in the entertainment biz. Lansdowne had apparently been turning down liquor license applications on the basis of not having enough cops to handle the extra work. So they were both working an angle, one to get more money for the clients he lobbied for, the other to get more cops and more pay for his cops.

So it appears Marco Polo Cortes, who throughout his career was linked to the Inzunzas, is the only one sitting in a cell, chances are he will cooperate; his pals in the scheme may or may not end up in prison, but it is certain none of the politicians they bought and paid for will get popped.

Who gets hurt by this, really? Gloria, Vargas, et al, send back checks, lol. All the influence was bought, all the policies and decisions made, the elections come and gone (except for the upcoming mayoral race). Except for the possible effect it will have on David, I see little outcome on the political scene.

This is all fun and interesting, but nothing changes.

KLoEditor: Matt Potter reported some time ago that Cortes was linked to the Inzunzas. Best, Don Bauder

Yep, and if you look at his Facebook page, you will see pics of them posted as children together, his whole FB friends page is replete with Inzunzas.

Anyway, that wasn't my point. The point is, no politician is going down for this. So apart from the entertainment value, what's the difference?

KLoEditor: I think it is a little early to say that no politician will go down for this. Best, Don Bauder

The only person they even suggested may have been involved in a quid pro quo was Bob Filner, but if they had anything on him they wouldn't have stopped the investigation until they had him in handcuffs. The fact that they are arresting people at this point is because they are at the end of the trail, in my opinion.

Nah, you can bet not one politician is going down.

KLoEditor: Yes, but law enforcement is still trying to hang anything at all on Filner, whether it has any validity or not. Best, Don Bauder

Pinched this from an NBC7 article: "Dave Maas investigated contributions made by Jose Susumo Azano Matsura to San Diego County District Attorney Bonnie Dumanis in an article for San Diego City Beat in 2012. It's been reported that this article alerted federal investigators to the case."

Just goes to show the absurd level of corruption in this city that a third tier progressive rag had to question contributions to the District Attorney's bid for Mayor, rather than the DA herself, who now conveniently claims that she wanted to keep her distance from the PAC. Really? She wasn't the tiniest bit curious a PAC would appear at the last minute to dump thousands of dollars into her losing campaign? By the way, who should be investigating these PACs and their contributors, if not the DA's office? Because well clearly she wasn't going to, was she?

KLoEditor: Dumanis's role in this should be scrutinized. It may not be, for a variety of reasons. Dumanis deserves fair treatment. Attention is shifting to Filner, since he is a handy target and law enforcement -- as we saw earlier -- delights in feeding negative information on him to the press. Other political names will enter into this, and all will deserve fair treatment. Politicians talk to a lot of people. Some turn out to be scum, but the politician may not have implicated herself/himself.

People should be very careful of U-T stories, since the newspaper's owner, Papa Doug Manchester, has been pushing his downtown project, and one of the conspirators reportedly wanted to launch a competing project. Manchester is quoted in the U-T complaining about downtown corruption. The U-T would be well advised to alert readers in every story that its owner's downtown project is involved in the controversy.

The same should apply to D'Souza. He has pleaded not guilty. He should be allowed to state his case. Certainly, the amount of money involved, and the implications of the alleged offenses, are not as large as the current case in San Diego.

The laundering of political contributions is a huge national problem that hasn't gotten the attention it deserves.