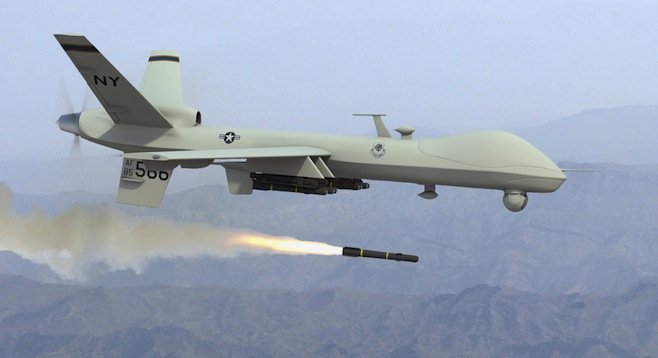 La Jolla's Linden Blue, whose General Atomics makes the Predator drone along with other exotic military hardware for the world's armies, has given $1000 to Republican city councilman Kevin Faulconer, who is running for San Diego mayor against Democratic council colleague David Alvarez.

The global arms-maker made his contribution on January 9, according to a disclosure statement filed by Faulconer's camp with the city clerk's office the next day.

General Atomics does not give exclusively to Republicans. Blue is a fan of and contributor to Democratic U.S. senator and drone advocate Dianne Feinstein, who in 2012 announced that Blue was getting engaged to ex–rear admiral Ronne Froman.

Fletcher and Qualcomm drew a series of stern hit pieces from the GOP Lincoln Club in that race. Since then, Fletcher backer Paul Jacobs, son of Irwin, has been replaced as Qualcomm CEO by Steve Mollenkopf. He may want to make up with the local business establishment, mostly Republican and backers of Faulconer.

Meanwhile, the San Diego–Imperial Counties Labor Council, AFL-CIO has filed a lobbyist disclosure statement with the San Diego city clerk's office revealing that its political and legislative director Kirsten Clemons and secretary-treasurer/CEO Richard Barrera raised a total of $573,369.27 between September 11 and September 30 for “Working Families for a Better San Diego to Support David Alvarez for Mayor 2014,” an independent expenditure committee run by the labor council.

Barrera — also a member of the San Diego Unified School District board — and Clemons raised the money via "email and telephone solicitation," the report says.

According to a lobbyist registration statement filed by the labor council on July 31 of last year, Barrera and Clemons were lobbying "to ensure passage of a prevailing wage ordinance." They made contact with Democratic city councilman Todd Gloria and two of his aides, the disclosure says.

Other labor council points of advocacy included "City policy regarding compliance with federal immigration law dealing with impounding vehicles driven by unlicensed drivers." The outcome sought was "to modify current police department practice so that it both complies with federal law but also results in fewer impounded vehicles."

This headline tells something, and I can't be sure what it is. One of the Blue(s) brothers of GA fame coughs up a whopping $1000, and it makes the top billing. Ah, an Alvarez group gets well over a half million from the local labor council, and that is buried in both the story and headline. Hey, guys, is there some partisanship and bias here?

Just another biased article by Mr. Potter. In his typical style, he relies on the short attention span of Reader readers to only read the first part of the article. Yes, Matt. $1,000 is somewhat less than 1/2 a million dollars. Do you see your own hypocrisy ?

There seems to be a theme emerging here in recent comments to Matt Potter's consistent reportage on the money flowing into San Diego's mayoral race. Blaming the messenger with allegations of "partisanship, bias, hypocrisy?"

I don't think so, phellas. Probably you should just defend your candidate Faulconer on his merits, if you can -- not on the money he is raking in (and sometimes misrepresenting) from developers, drone-makers and wheeler-dealers.

monahan, MY candidate is not Faulconer or Alvarez or Donald Duck. I don't even live in San Diego, haven't for more than two decades, and remember one of the best days of my life the day I drove north out of there for good. No more second-rate fire department, no more of the third-rate "Kolender Kops", no more of the botched city hall.

But putting a thousand dollar contribution from one of the odious Blue(s) brothers in the headline and burying the union money in excess of a half million in the story isn't balanced journalism. Matt wrote the piece, but who wrote the headline?

Probably someone who has qualms about the military/industrial complex.

Of all the ink-stained wretches in this town, I never feel jerked around by Matt Potter's reporting in the Reader. In this case as in others, two sides are presented. I mean, how "buried" can something be when we're looking at eleven paragraphs total? And if Potter throws in the True History of Admiral Froman getting inappropriately "touched," well, it keeps both him and the reader awake and amused.