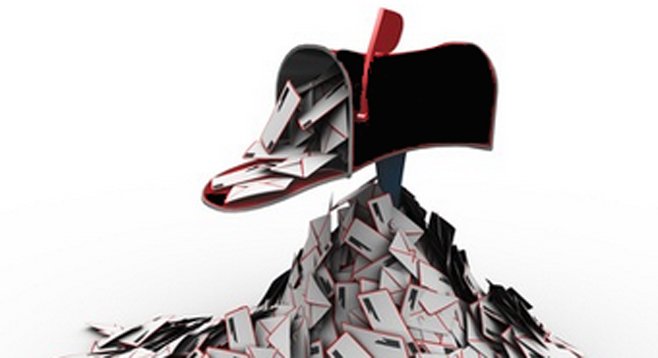 Cost of storage declared prohibitive; action could result in litigation

The City of San Diego is running out of space to store all those old emails — internal emails between staff and elected officials and correspondence from constituents. To remedy that, city officials have opted to purge any emails from city servers that were sent or received more than one year ago.

The first purge is set to begin on March 28.

The reason: email retention is getting expensive, say city officials.

A city memo posted by Voice of San Diego's Scott Lewis reads: "In developing an email retention policy, there was a need to balance availability of information with the fiscal costs related to its storage. If the City of San Diego were to continue with an indefinite email retention policy, we would need to look at replacing the archive system in the next fiscal year. Onetime costs to replace our Nearpoint system range from $400K-$500K."

The memo then justifies the decision by noting that San Diego County only keeps their emails around for 60 days. The City of Phoenix for only 30 days.

So, a year is not all that bad, right? Wrong, says open government non-profit Californians Aware (Calaware). In fact, it's against the law.

In a February 28 memo, Calaware's lead council Terry Francke delves into the issue.

"This policy contravenes existing law. Emails clearly fall within the definition of a public record. Further, city records are required to be retained for a minimum of two years. Destruction of public records may also be punished criminally."

Francke and Calaware are requesting that interim-mayor Todd Gloria rescind the order to delete the emails. If not, writes Francke, a judge might have to.

"...we request that you respond confirming agreement to, at the very least, suspend this practice until we have had time to seek judicial intervention if necessary."

Francke is giving Gloria until March 11 to respond or he will file an injunction against the city to rescind the policy.

Access to public records has become a hotbed issue in San Diego over the past two years. During that time, several lawsuits have been filed against the city. Three of which, one against interim-mayor Todd Gloria and two others against city attorney Jan Goldsmith, accuse the officials of not turning over emails from their personal email address relating to city business.

Both cases are making their way through court. And while the do, some city councilmembers are already up in arms over the proposed email purge.

Councilmember David Alvarez has asked that Gloria and incoming-mayor Kevin Faulconer hold off on the new policy.

"I am troubled by the proposed implementation of this policy as I believe it conflicts with the spirit of several open government laws," reads a February 28 memo from Alvarez. "In the interest of the City's commitment to open and transparent government, I would request that you docket an item at City Council to discuss the Council's position on the implementation...prior to it taking effect."

How could it possibly cost "$400K-$500K" to archive these emails? Most emails are just text, which are very small files. Huge-capacity hard drives are incredibly cheap now, as are the many brands of "cloud drives." I have a 50G account at box.com, which cost me $0.00. How many emails does the City plan on purging?

Terrible. Absolutely incredible. City Hall must be feeling that anything goes since the election of Mayor Kevin Faulconer. He needs to step in here and do the right thing on behalf of freedom of information.

Disingenuous but typical that other cities' practices are cited as justification for expunging the official record of how San Diego has been run -- an obvious dodge under cover of housekeeping to disappear evidence.

And picking Phoenix as the exemplar? Home of Sheriff Joe Arpaio who regularly racially profiles Latinos and demeans them when in detention. Arizona as model? Home state of Governor Jan Brewer, who only reluctantly vetoed a law that would have allowed shopkeepers to deny service to gay patrons based on a claim of religious freedom.

How can regular people support Calaware and lawyer Terry Francke?

Whoa. Great piece, Dorian. And it is absolutely not expensive to store emails, I don't know how they ever arrived at that number. I can't even believe they'd be purged after two years. Public records should be held for longer, and made easily available. Just wow. The fact that this was even on the table reeks of fish.

City Council is now trying to serve all US a Stinky Fish.

What will our Leaders serve US next?

Barbarella, I hope you keep this is mind in writing your next piece. We ALL need public records from time to time, birth certs, marriage certs, etc. But important legal doc. should be shit canned after a few weeks??? What are they trying to hide? And most off all why do they want to keep records on us for many many decades? hmmm!???!

This is very likely criminal obstruction of justice. Yahoo, Gmail, etc. store our Emails for free, all of them, everyone's. A single flash drive can store millions of Emails. They start at eight dollars or so. What costs money is forensic computer work. After one deletes, an expert can find the deleted files on the hard drive, that can be costly.

Don't expect Jan G. to say BOO about this...

Before we start thinking about purging the emails and the trails that can be followed from them, maybe we should go back to the 2006 KROLL report and review it. Heck we did spend over $20 million dollars for it and parts of that 266 page report were about transparency.

Have the recommendations in it worked? Have they all been implemented, if not why not? If we have not learned from the past, and the city's financial mismanagement then we are doomed to repeat it.

Hopefully our new Strong Mayor Faulconer will stop his charade on Monday March 3, 2013 after the 10 am Mayoral Swearing In Ceremony at the Jacobs Center for Neighborhood Innovation.

Back in the day, former Centre City Development Corporation (CCDC) President for the former Redevelopment Agency (RDA) stated they could not put the required legal backup documentations online for complex Redevelopment Agenda Items and deals because "the internet is not big enough" and "our file are too large to download."

What exactly are the assumed cost savings?

The only real savings will be to all those that are scared that their careers will be terminated if their emails are made public...

in the 1990's, during the Golding admin. I went to City Council Chambers & said, my hard drive (10 MEGABITS) isn't large enough to hold the adobe prog. I need to decifer [& what if prog. has virus?] the dockets & back up, why not put them in html /online readable text formats? The next year it was done, and a computer dept. employee gave me a better apple desktop (old from his garage) so that I could have space to put adobe, upgrade my "box";new plug--n-play style, when needed. The staff used to be helpful, now they just tell you "it is not my job, my boss says no, or can't help", while they go smoke for two hours, or chat w/ their co-workers for hours.-dMb

Before we allow the city to cover, or in this case delete their email tracks, let's go back and remember the not so distant past. Yes, that right the 2006 $20 million dollar KROLL investivestigation of the City and the high level officials who mismanaged it for years.
While this link http://www.sandiegoreader.com/news/20... mainly deals with the outrageous costs of the KROLL report, it accurately points out how misdeeds and mismanagement was ferreted out through an audit of emails.

Can our new Mayor, who is also the current Chairman of the City's Audit committee, really be considering this based upon what other entities do? With the City's record of fiscal mismanagement it's no wonder why our leaders are interested in deleting any potential trace of fiduciary malfeasance.

BTW just where is the City in implementing, but more importantly, following through on all those recommendations made in the KROLL report? This August will be eight years since it was published. Would anyone be surprised to discover we've fallen back into some old habits, just wondering.

Great questions ALL! Now all we need are some honest answers, but don't look to the UT or the pip squeak VOSD for any because they are part of the transparency problem in SD!

I never understood how the County of SD gets away with purging after 60 days. Using personal accounts to conceal conduct of government business is illegal. Gov Scott Walker of Wisconsin is currently being investigated for having a private internet router in his office while he was Milwaukee County Executive, Chris Christie is having similar problems.

I believe the Walker investigation is more along the lines of did he know his publicly paid staff was using private e-mail addresses and a separate Internet router to evade public-records requests or handle political business during work hours, which apparently is illegal in Wisconsin.

I suggest that the SD City Council change its name:

The SD CYA Council describes what they do so much better!

I'm thinking that Ex-Mayor Sanders is also behind this email deletion because he was embarrassed by City Emails when Scott Kessler used them in his lawsuit!

Email records are the only real leash voters have on how their elected Officials run City Government, no wonder they want to purge them ASAP.

The on-going lawsuit against the City's DSD, who approved an illegal complete teardown of the Jack in the Box located in North Park is a perfect example of why all emails must be preserved.

Hopefully some civic minded attorney like Mike Aguirre will seek an injunction against the City so that this decision is not left up to the next Mayor, who has his own record of City Council documents at stake but determined instead by voters like in a real Democracy, where people have a voice in their own Government!

Since Mike Aguirre endorsed Kevin Faulconer for Mayor, maybe he can use that leverage with the Mayor now and encourage him to nix this outrage.