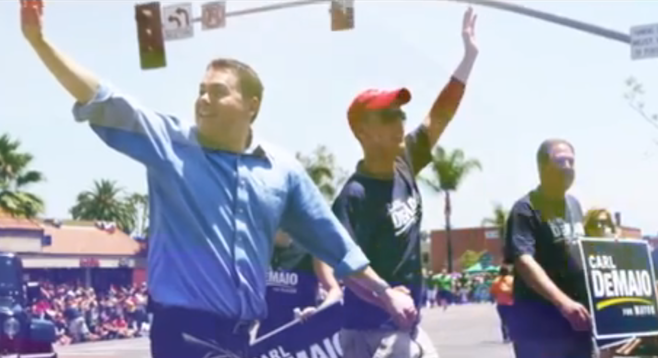 The Journal story went online this afternoon. It does not mention that Hale is publisher of San Diego Gay & Lesbian News.

The Journal says DeMaio is one of three openly gay Republicans running for Congress this year, but none has run such an ad, which very briefly shows DeMaio holding hands with Hale in the 2012 gay pride parade. The Journal story mentions that DeMaio is not the only Republican running for the seat.

The ad touts DeMaio as "a new generation reformer" who "isn't afraid to be different."

Wetsuit gets stuck to my body
Next Article

80% of PakTech can carriers placed in recycling bins went landfills.

The Journal story went online this afternoon. It does not mention that Hale is publisher of San Diego Gay & Lesbian News.

The Journal says DeMaio is one of three openly gay Republicans running for Congress this year, but none has run such an ad, which very briefly shows DeMaio holding hands with Hale in the 2012 gay pride parade. The Journal story mentions that DeMaio is not the only Republican running for the seat.

The ad touts DeMaio as "a new generation reformer" who "isn't afraid to be different."

Revisit the art of humorous gift giving
Next Article

“Uncle Harvey was forced to resign because he was gay. It’s important to teach that we have evolved.”

Wasn't Johnathan one of the organizers for the party last year that destroyed the koy pond in Balboa Park, killing all the fish. That's a sacred place for me and many San Diegans. Don't care about their orientation, they both seem very immature.

No, Hale was not one of the organizers.

commando: Hale's publication promoted the event. DeMaio and Filner got into a shouting match over who did what to whom. Best, Don Bauder

shirleyberan: Yes, you are correct; Hale was involved in that Balboa Park incident. Best, Don Bauder

commando: That is not surprising. Best, Don Bauder

Johnathan is a convicted felon. He is a burglar. Invite Hale to the White House and he'll likely steal the silverware off the table if he's not watched. Federal employees who associate with felons should be fired. DeMaio is a security risk and should be barred from running for Congress because he associates with a felon.

Hale's record is decades-old, as I recall.

commando: I believe you are correct; his troubles and name changes were some time ago. Again, I have been trying to reach a person who knows. Best, Don Bauder

Character does not change over time.

Burwell: That's certainly true of many people. I reported in June of 2010 how Hale's Gay & Lesbian News printed a scathing story on its competitor, Gay and Lesbian Times. The owner of the latter publication, Mike Portantino, had financial troubles. Hale had formerly worked for Portantino, then went out on his own. District Attorney Bonnie Dumanis began investigating Portantino, who committed suicide.

I can remember talking with Hale and some of his cohorts and did not believe what they said. Best, Don Bauder

Burwell: Hale has changed his name more than once, and has, if I remember correctly, run afoul of the law. I am trying to reach a knowledgeable person on this -- thus far unsuccessfully. Best, Don Bauder

But Hale looks so dreamy dressed in an orange jumpsuit and playing Bubba opposite Carl's Juliet in the Metropolitan Correctional Center's production of the Shakesrear classic.

Scott Marks: Leave it to you to create such images. Best, Don Bauder

It also appears that Johnathan is Carl's common-law spouse, not his boyfriend.

California does not have common-law marriages, so you are incorrect.

Burwell: I guess that would depend on how long they have lived together. I believe the number of years it takes to be common-lawed depends on the state. Best, Don Bauder

Jonathan Wyckoff, Jonathan Hackett are aliases for Jonathan Hale, if you look him up.

Response to Melinda Santa Cruz: "You go, Carl," can be taken two ways, but I assume you meant it in the positive sense. Best, Don Bauder

HERE IS SOME MORE RESEARCH: The controversy over Johnathan Hale became public in 2012. The publication LGBT Weekly seemed to carry the most on it. That publication reported that Hale was originally named John Theodore Wyckoff Jr. He changed his name to Johnathan T. Hackett Jr. before settling on the name Johnathan Hale.

LBGT Weekly reported that a district court clerk in Pulaski, Arkansas, confirmed that Hale had a felony conviction for burglary.

At the time, Lorena Gonzalez, then a labor leader, now a member of the state assembly, sent out a tweet asking DeMaio if his partner was a convicted felon.

I don't think the new add is going to help him run for Congress, especially when Carl has some things he hopes the public doesn't find out about like adventures in the city hall, as well as does Wyckoff-Hackett-Hale.

shirleyberan: I think that is a very good question. Will this ad help DeMaio? His campaign people obviously think so; they are publicizing the ad. Best, Don Bauder

No, this ad may not help Carl get elected, but everyone remembering that Scott Peters was instrumental in underfunding the City’s pension, essentially bankrupting the City, and named negligent by the SEC will help Carl get elected. And remember when the Kroll report was released? Madaffer took full responsibility “for moving the City forward,” Atkins said, “I’m only a healthcare worker,” and Peters essentially said, “Don’t blame my colleagues. They’re too dumb to understand finances.” Of course, by implication, Peters was saying he was not too dumb. He understood, yet he voted for the pension underfunding. We are going to be paying for this well into the future.

Despite the guilt by association referenced in many comments, if I were a resident of this congressional district, I would vote for Carl in a heartbeat.

Brian: If DeMaio is the candidate, and I believe that is not certain, this race would seem to be like the Faulconer/Alvarez race. The public loses either way. Best, Don Bauder

Scott Marks: Just to be pristine, his first name is Johnathan -- for now, at least. Best, Don Bauder

shirleyberan: Dithers is also an autocrat; Dagwood Bumstead is not a model employee. In fact, he is a lazy lout. I love the cartoon. Best, Don Bauder

It is very hard to imagine this helping DeMaio get elected. In fact, my take is that he just gave the election away. Prediction: Peters, with all his negative baggage, is reelected.

Visduh: This was my immediate impression, too. The ad would be effective if DeMaio were a Democrat. I fear that most Republicans -- and particularly the Tea Party wing -- are not ready to accept this new society that he touts. Polls show that the general public is much more tolerant of the gay revolution and such phenomena as gay marriage. That is very encouraging. But are most Republicans? Best, Don Bauder

Many people who are tolerant of the "gay revolution" as you described it are not pleased when certain aspects of it are put in their faces. They sometimes refer to that as flaunting one's differences. Seeing a video of the two of them holding hands seems to be what we might call "flaunting." Being honest about sexual preference is one thing, and this is something else.

Visduh: In the ad, actually, the image of the two holding hands is so fleeting that most viewers will miss it. However, the message that DeMaio represents a new world of understanding and compassion comes through loud and clear. His backers think it will work. I have my doubts. Best, Don Bauder

Visduh: One could say that this ad has an element of flaunting. Best, Don Bauder

I live in the congressional district, and the city, and always vote. I can honestly say that there are certain elections where I have cast my vote while holding my nose. I am probably the exception. The mayoral election was supposedly in a dead heat, but as is so often the case in San Diego, all one party needs to do to win is to convince the other one to not vote. Potential Alvarez supporters obviously stayed away in droves. Peters has to hope something on the ballot will draw Democratic leaning voters to the polls. Maybe a hot button state initiative? Like say, legalized marijuana? That would be ironic. I do not see Peters as the darling of the progressives. I frankly want a third political party.

mridolf: There is no doubt that progressives don't count Peters as one of them. Organized labor will not vote for DeMaio. The result will be an interesting race -- if DeMaio is the Republican candidate. Best, Don Bauder

Look for an ad from a Peters PAC showing a photo of a bathroom stall and a jar of Mayo sitting in the middle of the restroom.

KLoEditor: Sounds more like an ad for the Mayo Clinic. Best, Don Bauder

Interesting how schizophrenic the Republican Party is with regard to gay candidates. If it's one of their own, they can't figure out whether to ignore it, play it down, or flaunt it. Whereas when Clay Aiken jumped into the Congressional race last week as a Democratic candidate, one of the first things the spokesperson for Ellmers, who is the Republican incumbent, said was that Aiken's "political views more closely resemble those of San Francisco than Sanford." Nasty little slam. And it will presumably only get worse.

KLoEditor: Ellmer's remark was certainly cruel. It may backfire. Polls show that the general public is much more understanding of the gay lifestyle now. But I suspect Republicans -- particularly Tea Partiers -- are not. Ellmers is appealing to the far right fringe, as many Republicans running for office do. Best, Don Bauder

No disrespect intended, Don (or to anyone else, for that matter), but I keep checking the byline on this story to see if it's been switched to "Mencken".

Duhbya: Actually, DeMaio's staff sent out a news release alluding to the ad and its message, and noting that DeMaio would be holding hands with his partner (johnathan) in the ad. They also sent along a u-tube of the ad, and we ran the brief shot of the hand-holding which, as I have said, most people won't see because it goes by so quickly. Best, Don Bauder

Oh, I have no doubts as to the veracity of the article, but the more I see if it, the more I'm reminded of the "almost factual news" (credit Walter Mencken) aspect of it. Sign of our times, I guess.

Duhbya: I agree: more and more so-called news stories these days seem to belong in Mencken's satirical column. One reads a story and has the feeling that someone is pulling one's leg. Best, Don Bauder