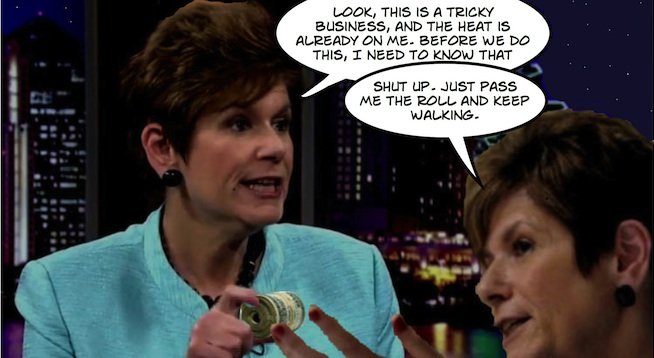 FOLLOWING THE MONEY IN CIRCLES, DOWNTOWN — District Attorney Bonnie Dumanis received over 25 different contributions to her terrible, horrible, no-good, very bad mayoral campaign that were in some way connected to Azano Matsura, the shifty foreign type who illegally pumped half a million dollars into San Diego politics last year. In an effort to wash her hands of all that dirty, dirty money, she has pledged to donate around $10,000 of the money — which the campaign paid to her after it shut down — to charity.

Speaking to the press on January 30, Dumanis campaign consultant Jennifer Tierney said that "the charity has not been selected yet, but it will be something focusing on crime victims." Today, SD on the QT has learned the name of that charity: DUPE, which stands for Defending Uncorrupt Political Elections. According to the charity's charter, "DUPE exists to provide restitution to innocent citizens who are unknowingly involved in illegal activities pertaining to civil elections." Its first payout, according to a report filed with the California Dept. of Nonprofit Corporations Compliance Division? Roughly $8000 to one Bonnie Dumanis.

In addition, I am privy to the knowledge that Bonnie Dumanis is also donating some of her own dirty money that has been funneled into various shady accounts of hers to a very worthy recipient : her opponent Bob Brewer. Bonnie has recently had some kind of spiritual awakening and has come to the conclusion that a new breath of fresh air in the D.A.'s office is what she should support. Despite many San Diegans who are incensed about the excessive pension Bonnie Dumanis will claim upon her retirement or leaving city service, the Beantown native is unapologetic! "I deserve every bit of money I can fleece from San Diego tax-payers!" she exclaimed.